Back to reality after the great week away in Cornwall, with limited trapping at my work premises in Roecliffe, Boroughbridge, and several forays out looking at leaves for leaf-mines.  Although an industrial site, the works premises backs on to a small willow fringed pond, with open fields next to the River Ure, which tantalizingly marks the VC64/65 border.

Nine nights trapping at work in September produced small numbers of moths, 368 of 52 species, and three nights so far in October offered 67 of 29 species, but included several of interest of which two macros were new to me.

I had wondered whether I had overlooked Juniper Carpet in the past but on seeing this one I was immediately struck by the distinct apical dashes.  I addition there were fairly late records of Blood-vein on 5 October and Light Emerald on 7 October.
After a few days stuck in hospital in early October I just had to get out and walk locally in the pleasant Saturday sun on 16 October.  Probably the best find was two London Plane trees between Langthorpe and Kirby Hill (VC65) which held numerous mines of Phyllonorycter platani.

A casual stroll round the Yorkshire Arboretum on 23 October yielded a few leaf-mines.  The best was a few mines on Sweet Chestnut which were proper mines rather than the numerous Phyllonorycter messaniella blotches, and could only be Stigmella samiatella, a new one for me.  Common on oak where it needs to be bred through to confirm, it is thought to be the only Stigmella on Castanea.  The only other mines of interest were some more Phyllonrycter platani this time on Oriental Plane.

On checking the 30+ Sweet Chestnut at Allerton Park south of Boroughbridge VC64 there were probably several thousand Phyllonorycter messaniella blotches, but despite careful searching not one S. samiatella mine could be found.

Posted by grampybustard at 17:52 No comments:

A week in Cornwall

Thanks to the generosity of my Brother-in-Law Kev and his partner Liz who arranged a week 21st - 29th August in a beachside cottage in Gorran Haven, Cornwall (VC2), I seized the opportunity to trap in Liz's nearby garden each night.  The weather was fabulous during the day with mainly wall-to-wall sunshine, the clear skies and large moon affected the catches overnight; the one cloudy night on 26th August gave the best results with 154 moths of  52 species. 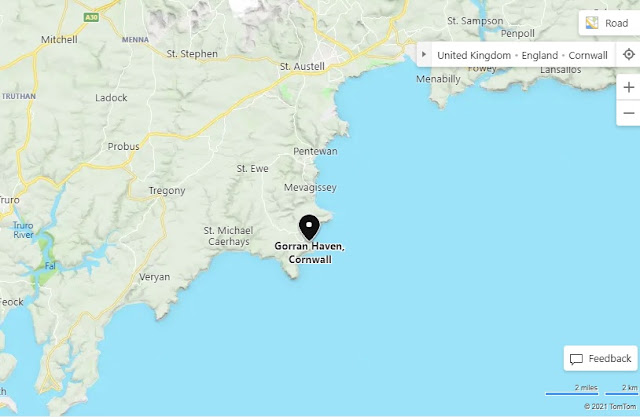 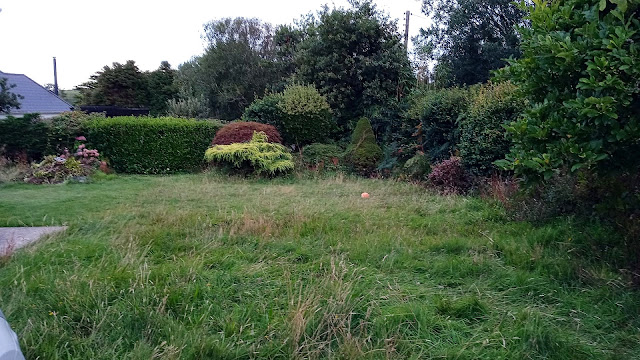 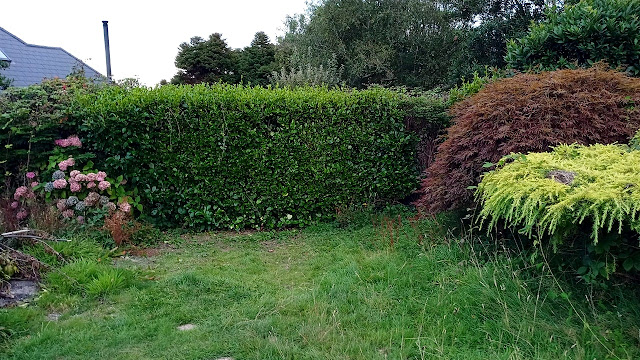 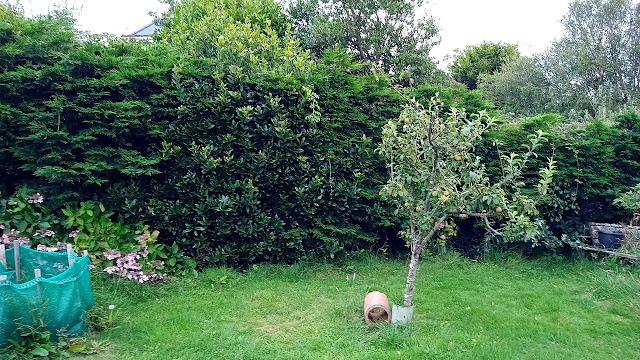 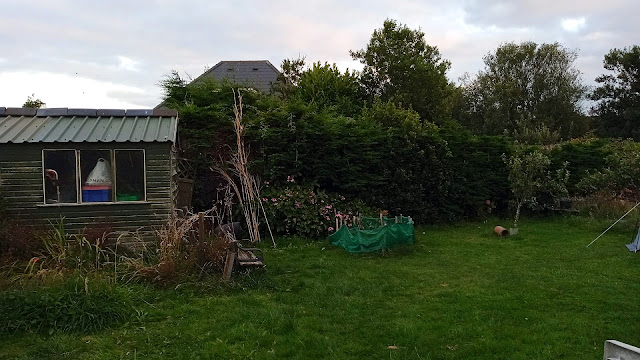 The catches were fairly modest but did provide me with three new species and a selection of southern species which I haven't seen since leaving Dorset in 2006.  The new species were Azalea Leaf Miner Caloptilia azaleella, Lobesia littoralis and a Jersey Mocha Cyclophora ruficiliaria, while those that I had seen before when living down south were Sharp-angled Peacock, Black Arches and L-album Wainscot.  The last three have just about made it as far as Yorkshire but I have yet to see them here. 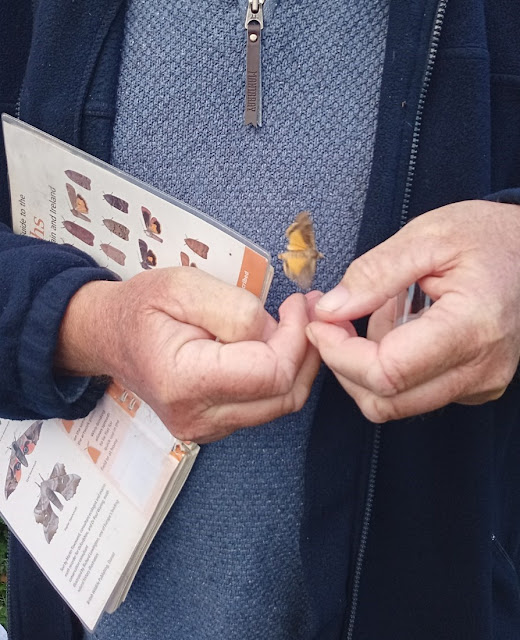 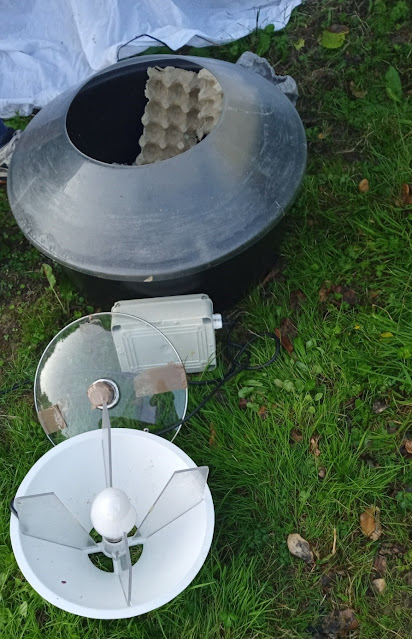 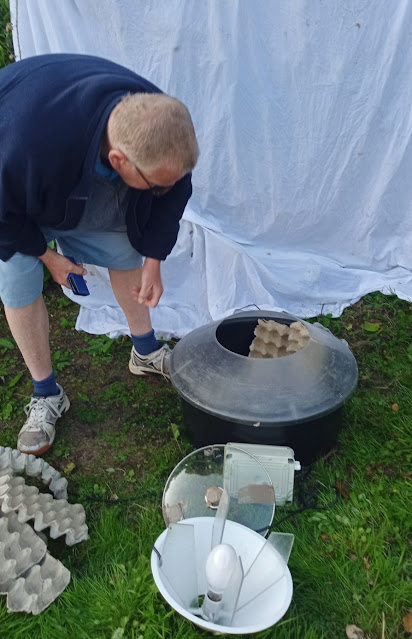 Fantastic scenery, beautiful weather, great company, very tasty food, some good moths, all in all a great week!
Posted by grampybustard at 11:17 No comments:

Another unwelcome addition to the garden list, Langthorpe VC65

On the night of 25 July I ran the Robinson trap on my parking spot adjacent to the house.  One of the first moths seen was on the underside of the trap collar, a Box-tree Moth.  As good as it is to get a new species, this adventive is not a popular addition to the UK list, and perhaps significant that my small garden is dominated by two large Box bushes, about the only plant that thrives there!  A first for VC65.

In addition there were several moths new for the garden, and a selection of the more colourful ones are included:

Posted by grampybustard at 19:07 No comments:

I have worked at the Alexanders site in Roecliffe VC64 near Boroughbridge since 2013, and regularly recorded moths attracted to the security lights, and more recently operated a 125w MV Robinson trap on waste ground adjacent to a small pond at the rear of the premises. 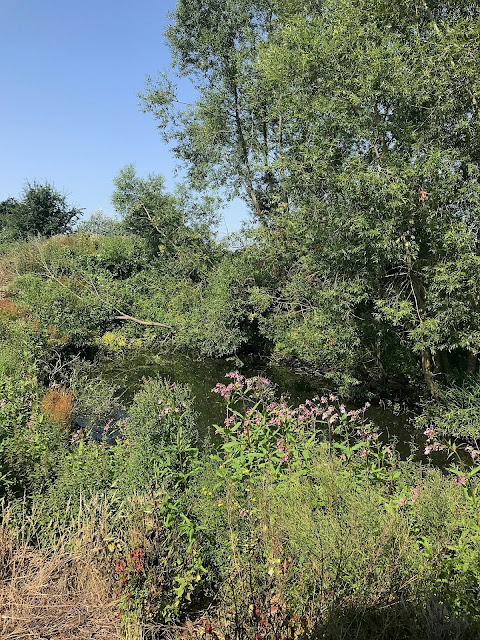 I operated the trap on six nights in July, on the 1st, 19th, 20th, 21st, 23rd and 26th, at slightly different locations when on subsequent nights.  Fairly modest totals each night but managed a total of 807 moths  of 143 species.  Many of these are new for site, and there were a fair number of significant records.  The most numerous were Chrysoteuchia culmella (Garden Grass-veneer), Bird-cherry Ermine and Common Footman.  Working through the list the moths of interest with comments, as follows:

Some of this family are difficult to identify to specific level but this is noticeably dark with a distinct spur shaped white mark on the forewing.

This tiny moth was very mobile and difficult to photograph, three were seen in total.

Another tiny moth, a damp grassland species, larval plant Canary Reed-grass and one I have seen at Staveley and the Brafferton woodland area.

One of the Mompha species, this quite a distinct one, the larval plant is Willowherb spp, of which the site has many plants.

This next moth provoked some interest in that I knew which page to look on for the family, the photos were taken in poor early evening light boosted by LEDs giving an orange cast to the image.  Typically after photographing it the moth made a dash for freedom so was just left with the images to try and put a name to it.  It should have been easy but the unusual colour made it less straightforward; initially Cochylis flaviciliana was considered but after input from Charlie and Harry C.roseana was thought to be more likely.  Teasel, the larval foodplant is fairly common close by.  Still a reasonable record and a new species for me.

A very distinctive tortrix moth presenting little difficulty in putting a name to it, and only my second.

A Gold Spangle which is a great looking moth, has an interesting distribution in that with global warming this species is retreating to higher ground at least in Yorkshire, but this shows the odd ones are still hanging on in lowland areas, as this is 16 metres asl.

The next two photos are interesting in that it shows a classic Gold Spot in the first photo, followed by one showing characteristics of Lempke's Gold Spot.  The best feature is the shape of the post median line where it meets the silver dash: in Gold Spot the line is very acutely angled pointing to the forward blotch, resulting in a pointed and long silver dash.  In Lempke's it is more obtuse and pointing towards the rear blotch, resulting in a shorter, broader apical streak.  However, at least in Yorkshire there appear to be some that should be confirmed by gen. det., with Lempke's paler, smaller and commoner on higher ground.  Being very cautious I ran this past Charlie who agrees that this is as good a candidate as could be for Lempke's Gold Spot, hardly an intermediate!

It was good to see a Silky Wainscot here, a moth I have only recorded at the nearby reed-beds at Staveley.
A moth that did not make it into the trap but was seen attracted to one of the security lights was a Scarce Silver-lines, a moth I have only seen once before in Yorkshire in 2012 when I had three at Pilmoor.
Posted by grampybustard at 15:22 No comments:

An unwelcome first for VC65

I have claimed Tinea pellionella caught in the house on three previous occasions but not taken photos or kept specimens.  I caught this one during the evening of 29 June and eventually managed to get a photo without letting it escape, and this time dispatched the moth to Charlie Fletcher for gen. det. confirmation.  As usual, Charlie got back to me without delay confirming that it was indeed what I suspected and was a first for VC65.  The fact that the common name for this moth is Case-bearing Clothes Moth does make this a rather unwelcome addition to the house list.

Posted by grampybustard at 08:39 No comments:

The theme for 2021 is reed-beds and the nearest suitable habitat to me is at Staveley, just a couple of miles from home.  The big drawback for the site is poor access with long distance to lug the equipment to get to the reedbeds.  In the past I have used a wheelbarrow but since my daughter moved her horses away I no longer have that luxury.  On Thursday night 8th July, I managed to get set up based at the furthest hide by 2215, and I retired to the car to get some sleep.  A start at counting and identifying from 0400 and took 3 hours to count the four traps and pack everything away.

A fairly modest haul with no great numbers, and surprisingly few Wainscot species.  A total of about 360 moths of 85 species, several micros still to be sorted, the most numerous being 47 Clouded Border, 40 Smoky Wainscot, 33 Uncertain/Rustic agg., and 26 July Highflier.  The reedbed specialities were few in number but included singles each of  Crescent, Southern Wainscot, and a new Yorkshire record for me of Obscure Wainscot.

A good feature shown by Southern Wainscot is a browband clearly seen when viewed head-on.

Other species seen included the following, some colourful moths others rather plainer but still of interest.

Posted by grampybustard at 20:28 No comments: