First night out for a while....

Now feeling somewhat better and after my first weeks work for a while, I was desperate to get out and do some mothing.  I chose a site on the North Yorkshire Moors that straddled two 10km squares, a coniferous plantation surrounded by moorland.  As it turned out, reasonable numbers of moths, but only 29 species, however, three of them were new for me. 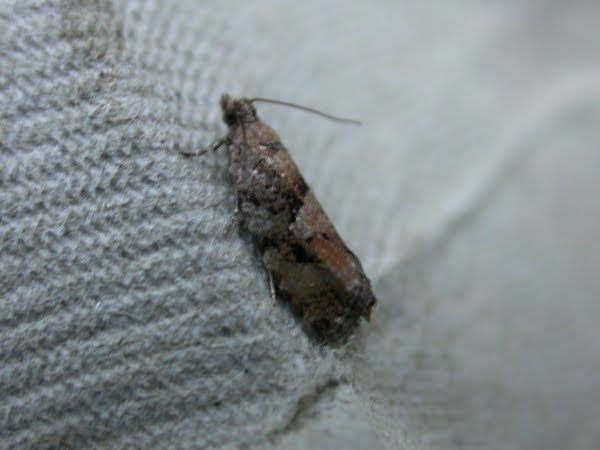 Spruce Bud Moth
Posted by Grampy Bustard at 23:23 No comments:

A chance to catch up

Having spent the last two and a half weeks recovering from an Op and not been able to get about at all, I have taken the opportunity to sort out all my digital photos, and put them into a sensible file system.  This has been very theraputic, ambling through many memories, and the satisfaction of imposing order on a chaotic mass.
Although all the moth files are now labelled properly, there is now plenty of scope to identify some of the many record shots, and add records as I go along.  Just a cursory glance at an old Dorset file gave me a new species, one that I just had not recognised before.  Now that they are all sorted, I can see some winter evenings work going through the individual photos, while dreaming of catching some of the summer hauls....
Posted by Grampy Bustard at 09:49 2 comments:

There has been a lot of speculation recently about the status of Burnished Brass moths in Britain, following a presentation by Colin Plant at last Novembers Annual Exhibition of Entomological and Natural History Society. He provided compelling evidence that the Burnished Brass should be split into two species, something the Europeans have been doing for some time. He suggested they could be identified on external features, the difference being the 'bridge' between the two gold bands on the forewing. If the bands were joined it was the new species Cryptic Burnished Brass Diachrysia stenochrysitis (sic), and if not linked was the 'old' species of Burnished Brass Diachrysia chrysitis. Both forms are illustrated in Waring and Townsend.

I add the following information from Charlie Fletcher:

"It is almost 50 years since the suggestion was first made that an additional species may be present within the taxon Diachrysia chrysitis.  More recently is has been shown that the moth that had been referred to in Europe as ssp tutti is in fact a sibling species of D. chrysitis, the western representative of the eastern species D. stenochyrsis. The English name Cryptic Brass has been suggested for this species. Following a long investigation, the two species have been definitively distinguished by their morphology, differences in structure of the wings scales, electrophoresis and different male pheromones.  So far as it is known, the two species have a similar distribution in Europe, including Britain"

"In the field, separation is based on whether the brown, non-metallic median fascia is complete (chrysitis) or interrupted by a band of green scales, these thus forming an "H" shape (stenochrysis). Examples at each end of the spectrum may be safely named using this character, however intermediate examples exist where the median fascia is traversed by a very narrow line of green scales.  These will probably require examination of genitalic characters to be certain of the species. However a character that appears to be fairly constant is that in
stenochrysis, the upper end of the lower section of the brown median fascia is distinctly rounded. In specimens of chrysitis where the median fascia is interrupted by a narrow line of green scales, this lower section tends to be square-ended."
Of course, this prompted me to look back through any photos I had, and of three that I found, there were examples of both species and an intermediate.
Posted by Grampy Bustard at 20:02 No comments: