An update on a micro species seen at Staveley.


There were about ten of what appeared to be Syncopacma sp., half of which had a bowed crossline, the rest had a straight crossline.  I sent a specimen of each to Harry to determine, and I heard back today that the two (one straight and one bowed) were both males and the same species Syncopacma cinctella.   These appear to be only the 2nd VC64 record and 4th confirmed County record of this species.  Older records were probably of the recently split species S. larseniella which appears to be the more common and widespread species in the UK but only three old records in Yorkshire. 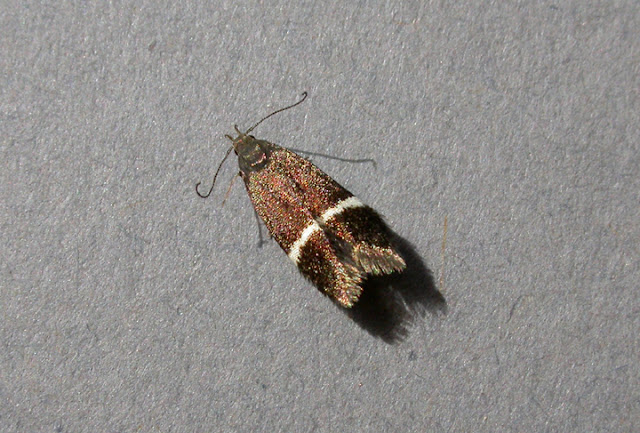 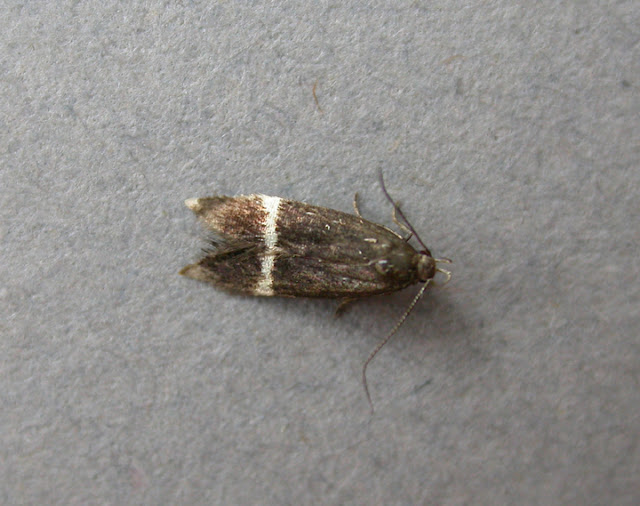 Posted by Grampy Bustard at 16:50 No comments:

The third night was forecast near perfect conditions, overcast, calm and muggy, and a trip to Staveley NR beckoned, despite the long walk with the wheelbarrow to get all of the equipment to second hide in the reedbeds.  A pleasant night was interrupted at around 3:30 when spots of rain were felt, which gradually increased, so a leisurely peruse of the traps turned into an expeditious retreat to the hide with as many eggboxes as I could rescue.  Inevitably, quite a few moths escaped in the dash, but a respectable haul of just under 400 moths of around 75 species was recovered.
The real highlight of the night was what I believe to be a Gynnidomorpha alismana, a wetland specialty, and a potential first for VC64 (update - this has now been accepted by Harry).


There was plenty of interest among the remaining moths with a migrant Diamond-back, eight Phlyctaenia perlucidalis, a Striped Wainscot, Southern Wainscot, two Silky Wainscot and a Blackneck.

Three nights on the trot...part one

Following the disastrous weather of the preceding few days that should have been Moth Night 2012, a surge of warm humid air from the south and traces of Saharan dust deposited across the UK, it seemed sensible to take the opportunity of trapping in this window of opportunity.

The first night was at Sessay Wood, with a fairly unremarkable catch of 103 moths of 23 species, of interest were 16 Four-dotted Footman which was still a fairly unexceptional count at what is the County's premier site for this species.

Tuesday night was a visit to Brimham Rocks on a moist and misty night, with a couple of hours of strong breeze in the early hours.  291 moths of 51 species, the highlights were a yet to be identified Caloptilia sp., two Smoky Wave, four Northern Spinach, five Welsh Wave and a single of the increasingly rare Double Dart.

Posted by Grampy Bustard at 10:50 No comments:

With the forecast for Moth Night 2012 on 21-23 June looking very poor, it was a matter of doing some trapping while I could.  I placed the Robinson out on the SSSI to see if the heath area held any other species, and the light over a sheet out on the main track, the old railway line.

The best of the night was an Apotomis semifasciana, the identity of which eluded me, but with input from others was actually pretty obvious, and I have had 4 there previously.  It is actually a scarce moth in Yorkshire with a handful of records in VC61 to 2002, and one in VC63 in 1986.

Four-dotted Footman numbered 36, and another of interest was a Miller, which for something that is just white and black on a grey background is a stunning moth.

The night ended with 163 moths of 48 species.  The Alder Kitten is not a bad looking moth either!
A walk along the length of the track produced three Glow worms, which is one more than last year, and always good to see.
Posted by Grampy Bustard at 12:15 No comments:

Some good news and some bad news....

On Thursday/Friday last week I found a small brown moth on my bedroom ceiling which looked interesting. It looked most like an Ephestia elutella and I sent a photo to Charlie and Harry, and the specimen to Harry for determination.  I have just heard back that it is indeed a female Ephestia elutella and it looks like a new to VC65.


The bad news is that I have had two more, which means I have an infestation......
Posted by Grampy Bustard at 16:38 1 comment:

Sessay Wood on night of 18 June

This started off as a bit of a disaster.  First of all I forgot the insect repellent, but I decided to chance going to Pilmoor.  Plenty of mosquitoes but none of the tiny biting bugs but in getting over to the SSSI I managed to slip of the log over the ditch and ended up knee deep with the right leg in foul brown smelly ditch-water.  So, having decided not to risk leaping over the same ditch several times in the dark I thought I would go to Sessay Wood nearby, where the conditions are much less demanding.....
Having set everything up, I then find that the plug adapter was not on any of the reels of cable, and then remembered I had removed it while using a reel to plug the strimmer into at home....it was on the bookcase - great!.  Fortunately Em was willing to bring it out to me and we met up halfway.  So eventually got everything working at 2245.

Not a bad night in the end, despite the wet leg, and just about struggled to 50 odd species.  The highlights were an Acleris laetana, two Birch Mocha, and ten Four-dotted Footman.

Posted by Grampy Bustard at 16:28 No comments:

After the rain stopped, the evening remained muggy with full cloud cover and no wind.  Wanting to avoid the little biting bugs at Pilmoor, I went to Sessay Wood again, this time 200m ENE of Monday's site.  It was another good night with some more significant records.  I had another Lobesia reliquana the 2nd VC62 record following the first at Pilmoor, just over a kilometre away.


The other exciting moths were three Eucosmomorpha albersana, which I had trapped a single in 2011 at Kilburn, and there was just one other in the previous 25 years, and only a handful before that in Yorkshire.

Others of note were five Orange Footman and a Marbled White Spot.  Also of note was a distant calling Quail heard several times.

Posted by Grampy Bustard at 15:02 No comments:

Having done pretty well with tortrix moths over the last week or two, I spent a fairly cool few hours trapping in Low Wood, Sessay last night.  Not a huge catch by any stretch of the imagination, and very few micros on which to try out the new Sterling and Parsons micro book on.  However, still a couple of good ones turned up, and the book steered me towards their identification, confirmed from other sources on the internet.  The first was a small cochylid with a fascinating mix of blue, grey and brown markings on a cream base colour.  Further study proved it to be a Cochylis nana, of which there are only two previous VC62 records.  The purple patch continues, and this photo reveals the beautiful colouration...bear in mind the moth is only 6mm long, or less than 1/4 inch in old money......

The other littl'n was a flat-winged tortrix with what appeared to be a pale shawl around its shoulders.  This, the small size and the diffused darker markings on the wings identified it as Capua vulgana, a moth I have had a couple of times before at Brimham.

Posted by Grampy Bustard at 19:00 No comments:

Needless to say I wasn't around for the Coronation, and do not recall anything about the Golden Jubilee, but the Silver Jubilee in '77 still ranks high in the most memorable periods of my life.  No, not one flag waved, or patriotic cheers, but just a fantastic birding trip round the south-east, with my best mate Pog in his red MGB, to the ever-present Boz Scaggs hit on the radio.  We visited some fabulous sites and had some great birds, many of which were new for both of us.  It started with Mandarins in Surrey, Cetti's and Savi's Warblers and Glossy Ibis in Kent, and on to East Anglia for Golden Orioles, Golden Pheasant, Stone Curlew, a superb female Wilson's Phalarope, Woodchat Shrike, Red-backed Shrike and a fly-by Pratincole.  Unfortunately I had to come home to go back to work but Pog went on and got White-winged Black Tern, Honey Buzzard, Spoonbill and Bittern....
We both have had some great birding days since, but that four days takes some beating, and the Phalarope is still the best looking plumaged bird I have seen of all the dozen or so Wilson's I have seen in the UK.  Cracking!
Posted by Grampy Bustard at 13:10 No comments: