Following the successful visit to Lancashire at the end of last week I stayed a bit more local for the early part of this week.  Several speculative visits to interesting habitat for plants produced the surprise of the week.  A look at a grassy bank with plenty of Kidney Vetch produced at least two small dark blue butterflies which size-wise indicated Small Blue.  I was then thrown when photographing the underside of one of them: it was white with black spots which I took to be indicative of Holly Blue.  Bearing in mind it is 15 years since I have seen Small Blue in Dorset I had forgotten that they had dark uppersides and white undersides with black spots.  On checking it was clear that I had in fact seen two male Small Blues at what turns out to be one of two sites in Yorkshire but the locations are not commonly known.


.
A walk around at Greenhow produced several interesting sightings, including a very good candidate for Mountain Pansy.
I then visited Old Glebe fields near Leyburn looking for Burnt-tip Orchid, no luck on this occasion but good to see so many Green-winged Orchids even if they were past their best, and a few Twayblades, and several Water Avens.
On Wednesday I went looking for Argent & Sable moths at Bishop's Wood near Selby.  I eventually had at least seven in flight and eventually one perched on White Campion, even if it didn't pose properly!
Another speculative visit to interesting habitat in VC64 produced another surprise: Pasque Flower.  This is a plant I have seen before in Gloucestershire I think but never realised they occurred this far north.  In addition there were a small number of Fragrant Orchids coming into flower and at least 150 Chimney Sweeper moths, a species I had recorded in Dorset well before I was interested in moth recording and somehow hadn't made it on to my list.

Posted by grampybustard at 06:59 No comments:

Two days in Lancashire, the first on Thursday for a botany walk at Warton Crag, and evening trapping at Gait Barrows, followed on Friday by some instruction on finding Barred Tooth-striped larvae.  First of all the three new moths which were all at Gait Barrows: neither of the pyralids were on my radar but proved a welcome surprise, three Anania funebris and a single Pyrausta cingulata which evaded the camera.
On Friday, three of us joined Paul from Butterfly Conservation who proceeded to give background on the Barred Tooth-striped moth for which this area is a stronghold.  He went on to give the distribution and apparent habitat requirements and survey methods before taking us to suitable areas nearby.  The preferred foodplant here is young ash saplings especially on woodland edge and adjacent to mature trees,   There seemed to be plenty of feeding signs and frass but the larvae were few and far between, possibly moved well down into cover or predated?  Fortunately two larvae were already staked out and a speculative search produced three more.  The tiny caterpillars not much more than 10-15mm were green in colour with a yellow lateral stripe and had a distinctive posture with its rear pair of legs grasping and the body head up at anything between 30-75 degrees, especially when disturbed.
The botany walk at Warton Crag was organised by the Wild Flower Society and attended by about 15 eager botanists.  The walk started in the quarry area, up through the woodland to the top of the quarry.  There were numerous plants in flower, some so small that at times most of the group were on their knees or prostrate.  I managed 70 odd species noted of which over 40 were new to me and probably the scarcest plant Squinancywort is one I have seen before (at Berry Head I think, many years ago),  On the walk back down the sun came out waking up several Small Pearl-bordered Fritillaries .

On leaving the group at Warton I went to Arnside nearby to see a roadside Star-of-Bethlehem flower.
In preparation for the meeting on Friday I went to Gait Barrows and had a pleasent evening walk on the 'limestone trail'.  Close to the beginning of the trail I found Spindle in flower and some Herb Paris that was just over.

The commonest grassland butterfly was Dingy Skipper and these two played hard to get....

Thursday night was spent moth trapping in the main carpark and adjacent track and a total of 73 moths of 28 species.  Nothing really of note but Triple Lines and Coronet were good to see, the first since moving north and scarce east of the Pennines.

A great couple of days with some fantastic scenary and habitat, nearly 50 new plants in total, three new moths, and several more moths re-aquainted with.

Posted by grampybustard at 10:36 No comments:

A few odds and ends

With moth numbers reported by many as still being very low I have made little effort to spend nights out for such little return; we are obviously still in the big 'dip' between the Orthosias and the early summer species.  However, daytime walks have proved very rewarding with manageable numbers of new species to find and identify, as well as some fantastic scenery. 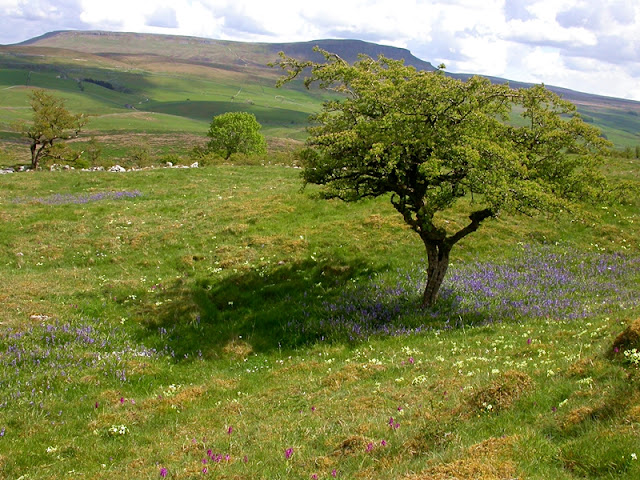 The hillside was carpeted with Bluebells, Primroses, Wood Anemones and Early Purple Orchids as well as some interesting sedges, 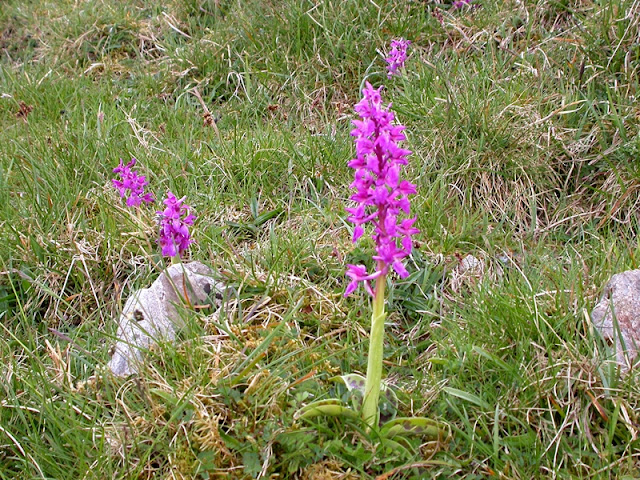 This last photo shows a spider with prey clinging to a sedge in a very boggy part of the common, the habitat favours the scarcer bog-loving Xysticus ulmi.

Posted by grampybustard at 12:43 No comments: