That time of the year again and I have had a small number of Copper Underwings sp.  I am aware of many of the stated differences between Copper Underwing and Svensson's Copper Underwing but am also aware that some of these features are not reliable and Les Hill is studying the species pair in some detail.  Having found one in the house dead which was the well-marked one from Brimham a couple of weeks ago, and escaped while photographing it in the hall at home, I spent some time checking over the individual.


The main features to check are as follows:

3/  General colouration and contrast - very contrasting (CU), or not so (SCU) indeed Svensson's has been known as 'drab' Copper Underwing

5/  The black and white markings on the sides of the abdomen - contrasting and well-marked in CU, less so in SCU


Of course some of these features are subjective and open to interpretation, others appear more clear-cut.  When applying these checks to this individual it throws up some interesting points.

1/  The palps.  In this individual they are clearly dark with pale tips indicating Svensson's. 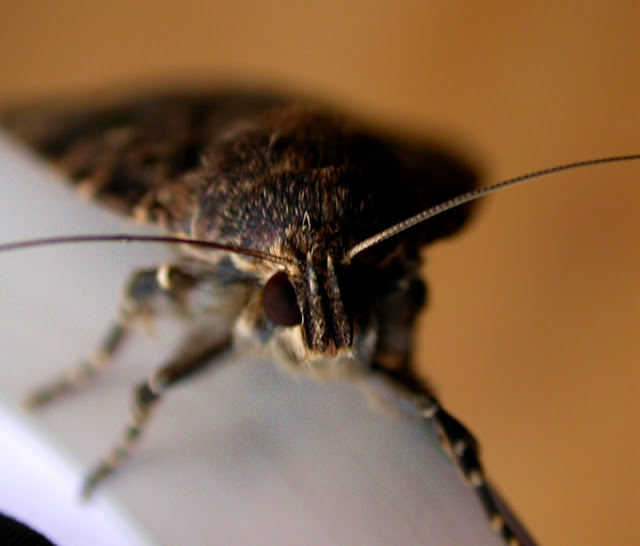 2/  The extent of the copper on the underside of the hind-wing - limited, indicating Copper Underwing. (In the photo there is some shadow and a faint suggestion of darker copper extending towards the base but in reality and good light this is not so). 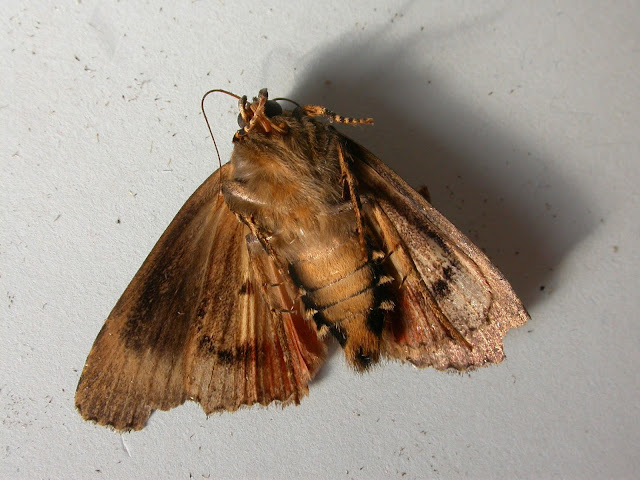 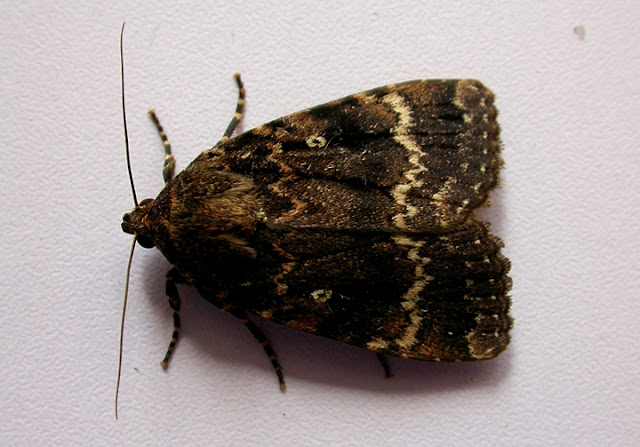 4/  The two point tips. joined by line and extended to wing edge - backwards suggests Copper and forwards Svensson's. On this one forwards indicating Svensson's. 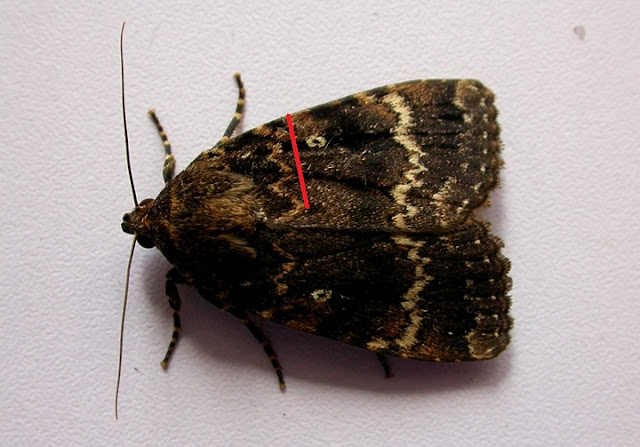 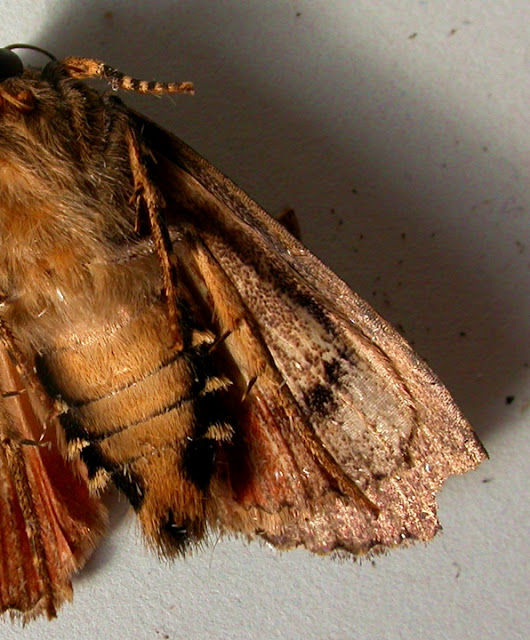 All in all, five features, three suggesting Copper Underwing and two suggesting Svensson's Copper Underwing.  I know many observers use the palps as the main (only?) feature to distinguish the two, but this one individual shows that it is not as straight forward as one would think.  I think this one is going to have to have its bits done to confirm, something I have done very little of but really should on this occasion, especially as it is already dead.  Watch this space....

Posted by grampybustard at 17:03 No comments:

There were a handful of lowland northern species that Mike had on his target list and Pilmoor was the chosen site.  Cooler than the previous night and not as productive, but Angle-striped Sallow put in an appearance as hoped.  A total from my two traps of 112 moths of 26 species, Mike's still to be added. The most numerous were 27 Green Carpet, 16 Epinotia ramella, 11 Ypsolopha parenthesella, ten each of Common Marbled Carpet and Canary-shouldered Thorn and nine Large Yellow Underwing. The only possible migrant was a single Diamond-back.  Thee follows a small selection of micro-moths, including a poor record shot taken in the pot of Cydia fagiglandana which is relatively scarce in the County.

Of the larger moths the following are attractive and includes the scarce Angle-striped Sallow.

One of the micros which always amuses me is the Ypsolopha sequella which when viewed from above gives a very passable impression of Bugs Bunny....
Not too bad a night and delivered some more species for Mike's list.

Posted by grampybustard at 16:06 No comments:

Following a long planned visit to the area by Mike Snelling of Worthing who I had first met on a Hungary trip to Farm Lator, it seemed the weather looked best for the night of Wednesday 7th Sep.  As a fellow southerner, the call of northern upland species made Brimham a prime trapping place.  A warm muggy night with the temperature still +17 at 0130, the haul of 285 moths of 35 species was not too bad a total, and provided Mike with a handful of his target species.  The highlights were the very distinctive and scarce Epinotia trigonella which unfortunately avoided being photographed, but a female Anomalous sat well.

Autumn is always brightened by the Sallow family and several put in an appearance as expected at this site.
The commonest moths were 54 Autumnal Rustic, 51 Flounced Chestnut, 40 Large Yellow Underwing and others of note were 13 Barred Chestnut and 7 Neglected Rustic.

Posted by grampybustard at 20:24 No comments:

What a difference 3 weeks make!  Taking the first opportunity of time off following the excellent previous visit only 22 nights before, this proved to be somewhat of an anticlimax.  I trapped in the same location hoping to repeat some of the success of the previous visit and hopefully to secure some specimens of Anacampsis blattariella and the closely related and rare populella which I was sure I had caught before.  Regretfully neither put in an appearance and numbers and species were well down with just 74 of 24 species.  Besides an Angle-stripe Sallow the best was the first Yellow-barred Brindle of the year.

Posted by grampybustard at 20:24 No comments: