A line of alders at Pilmoor (VC62) were noted as being totally decimated on 15 September 2018 by what appeared to be at least 100 small shiny beetles. Having seen a similar photo on the internet I was alerted to the fact that they were Alder Leaf Beetles Agelastica alni, that were considered extinct in the UK until 2004, when they suddenly reappeared in Manchester presumably as an accidental import on alders.  It has since spread to Lancashire, South and West Yorkshire and also appeared in Hampshire.  On checking my records my first photos of the culprit were taken on 20 August 2018.  The first photo below is a slightly out of focus phone photo but does indicate the scale of the damage to the alder leaves. I do recall seeing them here in at least one previous year (probably 2017) but despite looking through my photos I cannot find any evidence.

On sending the record to the YNU Coleoptera Recorder he was kind enough to advise me of the current distribution in the Yorkshire database, and so it would appear to be new to VC62. 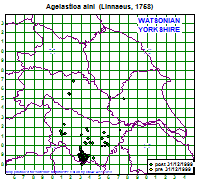 Posted by grampybustard at 12:22 No comments:

Where one species becomes three...

Not a huge amount to report over the last month except a few more leaf mines which I will summarise at the end of the year but the opportunity to attend a days training on moth genitalia dissection proved most worthwhile.  I had taken four specimens of November Moth agg. from my last trapping attempt on the night of 20th October at Sunbeck Wood, Brafferton Spring.  I used the training opportunity not only to brush up on technique but to also dissect the four specimens I had.  The first three appeared to be males of each of the three species, so instead of November Moth aggregate x 3, I can now record singles each of November Moth, Pale November Moth and Autumnal Moth.  The fourth turned out to be a female sp. which cannot be done.  Although this proves that each of the three species do occur at this site there is no way of knowing the proportion  of each population without a much larger sample.  I am not interested in taking any more specimens at this site, just knowing and proving each occur is good enough for me.
Both of these photos were taken by iPhone down a microscope eyepiece so despite not being of the best quality they are enough to show the salient features.  The photo above shows the complete male genitalia and the easiest feature is the two upper dark points on the anal plate that are well spread apart (not the pair of lower points on the valvae).  Compare that with two inward pointing and much closer dark points on the plate (minus the rest of the genitalia) of what is clearly a Pale November Moth.  I neglected to get a photo of the Autumnal Moth...however it is obvious in that there are no spurs at all on the valvae.
There is often uncomfortable questions asked about the validity of taking specimens. I am very conscious of all such concerns but console myself with the fact that very selective specimen taking is essential to identify some species and that conformation of presence is valuable in conservation terms.  The very tiny number taken is probably far fewer than the numbers killed by driving a car at night.

I did attempt a couple of micros but it was soon very evident that my ability did not stretch to such small genitalia, so for any important micros I may still have to defer to the vastly superior expertise of Harry....
Posted by grampybustard at 19:29 No comments: