It's official spring is here!

Following an overnight frost down to -1 here in Langthorpe, the temperature is now a creditable +19, with wall-to-wall sunshine.  In the early afternoon, I went for a stroll at Pilmoor, looking for Orange Underwings, and concentrated on the area of aspen, the foodplant of Pale Orange Underwing.
At least four Orange Underwing were seen, three on the track and one on the SSSI heathland.  Single Peacock, Orange Tip and Brimstone were all seen on the track  Several Chiffchaff were heard singing, and a couple of Marsh Tits sneezed away in the undergrowth.

The reasonable weather was a forerunner of what to expect this coming week.  The pools at Allerton were drying up and the movement of gulls through was very hit and miss, with larger gulls barely in double figures and counts varying between a couple of hundred gulls and nil!
A Chiffchaff, my first summer migrant, was heard singing in the riverside willows at Langthorpe  With much of the rest of the country bathed in decent temperatures, being on the edge of the Vale of York meant the usual low-lying radiation fog, which took ages to burn off during the day, keeping the temperatures down.  Still, managed a couple of nights out trapping, one night at Pilmoor, and a couple of days later at nearby Sessay Wood, rather eerily in the fog....  A total in excess of 550 moths of at least 16 species was a good return, with Small Quaker seemingly doing exceptionally well this spring.
Posted by Grampy Bustard at 16:29 No comments:

A funny old week, with visits at different times daily to Allerton Park to look at the gulls.  On Monday 12th, reasonably close views of an adult Iceland Gull, but little else of note.
On Tuesday 13th, no white-winged gulls, but a fine dark large adult Herring Gull, standing out from the nearby paler argenteus gulls.  The long legs were noticeably pale pink, and the shade of grey was consistently darker than the other gulls when viewed from different angles.
Wednesday was the first blank day at Allerton, with no species of any interest.  I spent a couple of hours walking around Pilmoor, looking for Orange Underwing, but the only lep of note was an orange butterfly hurtling by, probably a Comma.  The cool breeze took the edge off the Spring sunshine, and a flock of c.50 Fieldfares chacking overhead was a reminder that it was still early yet.

Another 2.5 hours with a lamp at Pilmoor, although it felt chillier than the minimum of +6 recorded.   Fewer moths than Saturday night, but still a respectable haul:  a Tortricodes alternella, 30 Yellow Horned, a March Moth, four Oak Beauty, two Engrailed, 38 Small Quaker, two Common Quaker,  23 Clouded Drab,  eight Twin-spotted Quaker,  three each of Hebrew Character and Chestnut.

Posted by Grampy Bustard at 16:57 No comments:

Since the last entry, visits to Allerton Park tip as it is referred to in the Yorkshire Bird Report, have continued daily.  On Friday 9th, a 1st-winter and 2nd-winter Iceland Gull, two pale-winged argentatus (one of which was new with slightly darker tertials and primaries and paler head), and the 2nd-winter Glaucous Gull with the missing primary.
A late visit on Saturday 10th produced very few gulls, and only a 2nd-winter Iceland and one pale winged argentatus were seen.  However, earlier in the day, Paul Irving had seen the Kumlein's Gull there, along with several Iceland Gulls and the 2nd-year Glaucous with the missing primary, and up to seven Red Kites. 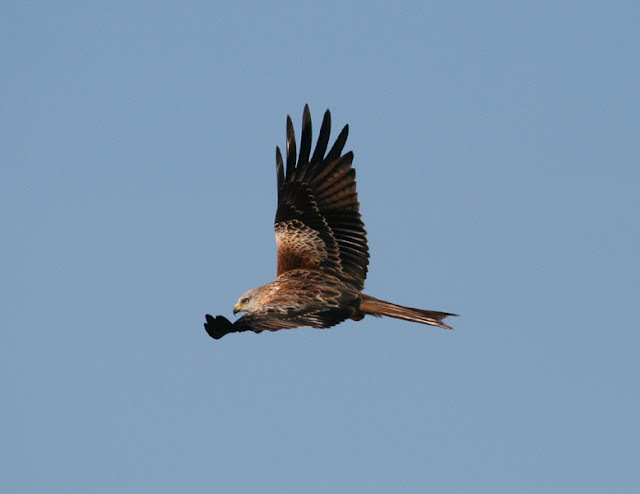 A morning visit this morning, again not more than 200 gulls in total.  However, gulls floated in and other left, so at times there were no white-winged gulls, and at one time there were two 2nd-year Iceland Gulls, and two 2nd-year Glaucous Gulls present.  One of the Glaucous Gulls was a new bird, with a complete set of wing feathers, and a greyish cast to the pink bill. 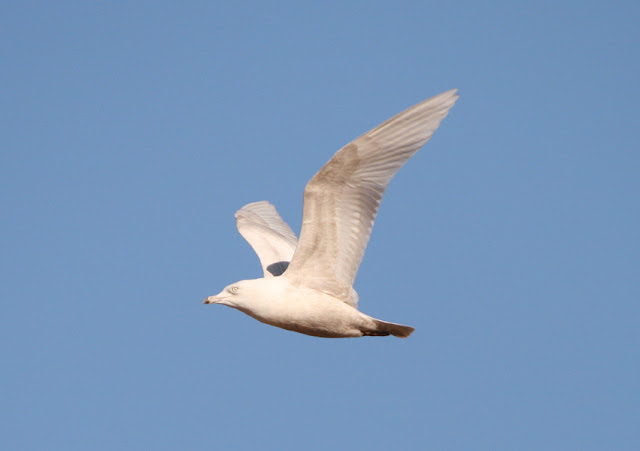 There have been small numbers of obvious adult argentatus among the argenteus,  and here is a photo of an adult of each next to each other, showing the characteristics well.  When similarly aged gulls are not so close together for comparison it is much more difficult to discern.


As a round-up for the total number of odd gulls at Allerton Park Tip, I would say as a minimum there have been three Glaucous Gulls, ten Iceland Gulls, a Kumlein's Gull, three pale-winged argentatus, a Caspian Gull and  three Kittiwakes.  Not bad, eh?

Posted by Grampy Bustard at 18:46 No comments:

I spent 3 hours trapping with a light over a sheet at Sessay Wood last night, and there were plenty of moths about, with by biggest ever March catch.  This in addition to an interesting night sky, with Mars, Jupiter and Venus all showing well, and missed Mercury in low cloud at sunset.

Charlie advises me this is a record count of Yellow Horned.
Posted by Grampy Bustard at 08:30 1 comment:

Even better views of a pale-primaried gull and distant views of another one that was sleeping, at Allerton Tip.  Today's bird, if it was the same as yesterday seemed to be the same size and build as Herring, and was seen well including in flight.  I presume the bird at Farnham was one of these birds, and I am now happy that it (they?) are probably argentatus from the pale extreme.  An interesting bird nevertheless. 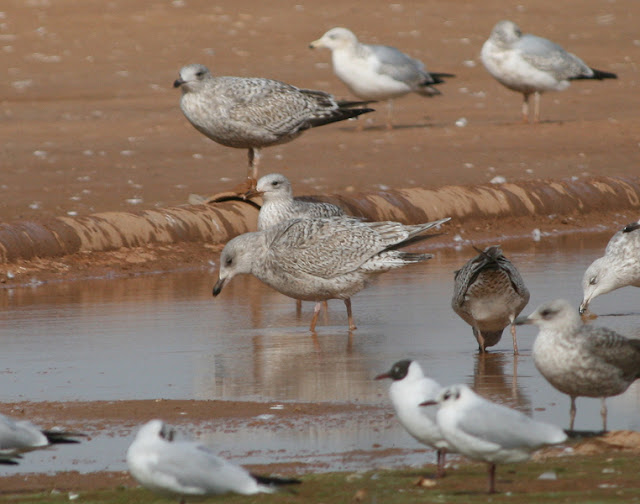 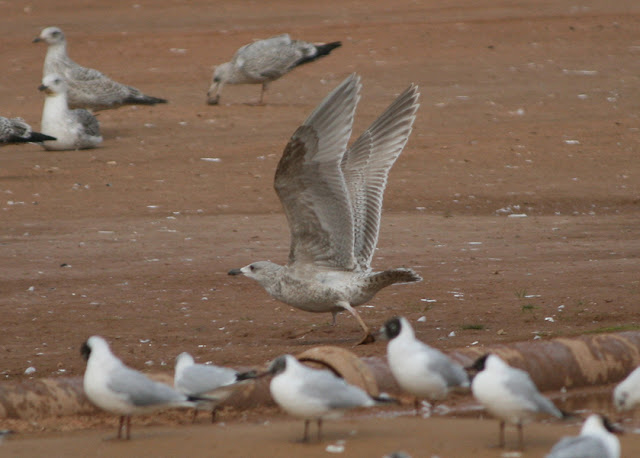 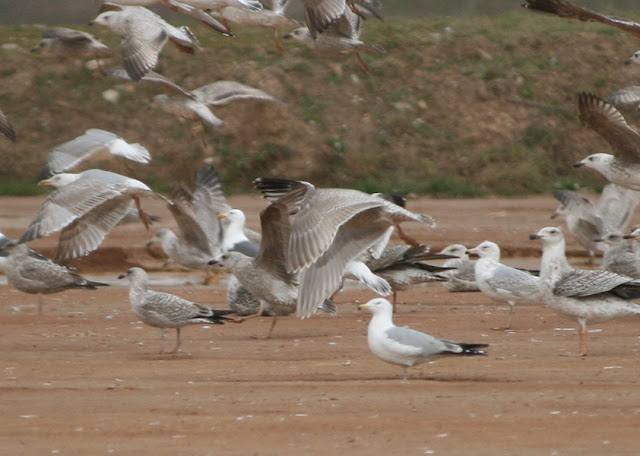 In addition, there were a 1st-winter and a 2nd-winter Iceland Gull, a Red Kite and up to four Buzzards.  To finish off, one of the singing Hedge Accenters,  presented itself next to the car, and at least I can identify them..... 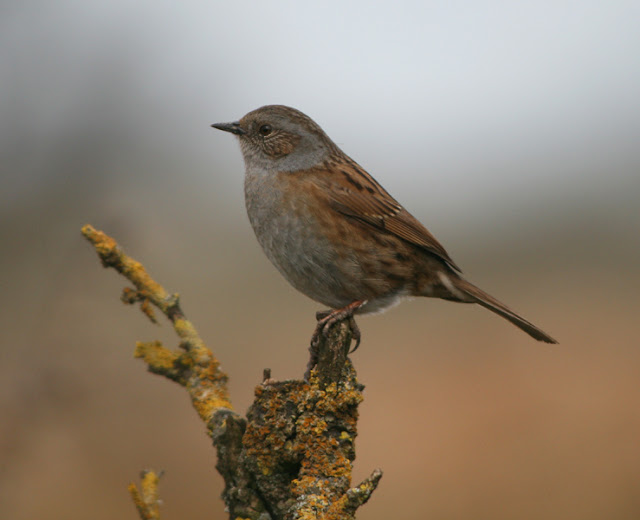 Posted by Grampy Bustard at 19:54 No comments:

At Allerton today, I visited early afternoon, and with the wind direction, sunlight and where the gulls were, good views were had of many of the gulls, although some were still fairly distant.  The highlights today were two 1st-year Iceland Gulls, two advanced 2nd-year birds with olive/orangey yellow bills with no dark tips, also the 2nd-year Glaucous from yesterday.
I came across this 1st-winter bird with washed-out tertials and primaries, probably the same as that seen at Farnham, and had several minutes view at 150m range, although it was asleep for the most part.  It briefly raised its head to reveal a small head, neat all dark bill with a hint of pale (red?) at base.  Of c1000 Herring Gulls present, it was the only one showing any hint of such washed out primary-tips. 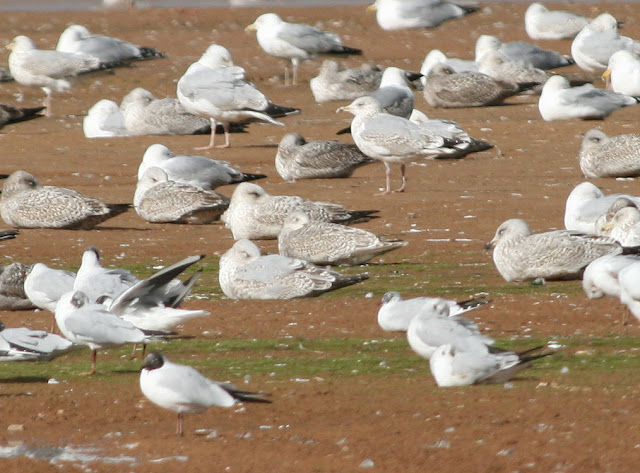 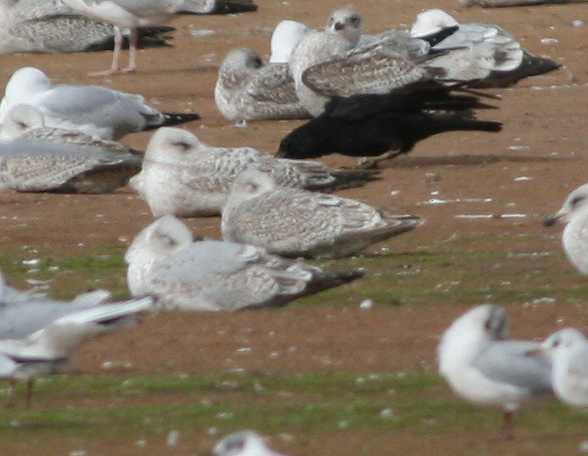 The options are that it is (a) an Argentatus Herring Gull from the pale end of variation, (b) a Kumlein's Gull from the darkest end of the spectrum, (c) a hybrid (although presumably not x Glaucous due small size and small dark bill), or (d) a leucistic bird.  I am open to suggestions, and any thoughts or comments would be welcomed.
Posted by Grampy Bustard at 23:02 1 comment:

With the forecast for Wednesday looking so poor, and the sun shining brightly again this morning despite the early frost, I just had to go and take advantage of the bright sunlight at Allerton.  Not many gulls on arrival and certainly nothing of note, and many of them drifted off towards the tip.  Still it was pleasant sitting in the car listening to singing Hedge Accentors, Reed Buntings and Tree Sparrows calling, and Long-tailed Tits working their way up and down the hedgerow.
Some loud shots at the tip, presumably bird-scarers, brought most of the gulls on to the wash-pit, including two Iceland Gulls, an obvious 1st-winter, and a 2nd-year.
No raptors for the first two hours, but then two Red Kites and up to six Buzzards circling on thermals at some height above the site, their presence only given away by their constant calling.


A small selection of other gull photographs, taken in flight as they commuted between the main tip and the wash-pit area where I was parked.

Posted by Grampy Bustard at 15:15 No comments:

What a fantastic morning, bright blue sky and sunshine although the stiff breeze was a bit on the chilly side.  I spent several hours at the washing pit next to Allerton tip, and although all the gulls were facing the same way into the wind, unfortunately they were mostly tail on.  Still, had some good views of the assorted gulls present, and at least 3 Iceland Gulls, probably all 2nd-years, and a 2nd-year Glaucous flew over, perching briefly on the far shore.

After a couple of minutes it took off with most of the other gulls and one of the photos I took managed to get it and an Iceland together.  Interestingly, there is a hint of a tail-band showing on the Glaucous, so possible some Herring Gull genes in there somewhere, and it also has a primary missing and some oil on the left wing.

Every now and again, the gulls would fly up, often due to one of a couple of Red Kites which flew back and forth over the site.


A small selection of other gull photos were taken.  The vast majority of birds present were immature birds, as one would expect for species that take 2-4 years to become full adults.

Posted by Grampy Bustard at 20:50 No comments:


Following the excitement of the Kumlein's Gull on Thursday, another visit to Farnham Quarry on Friday was a complete let down with only 15 Herring Gulls by 17:00, and a couple of hundred Black-headed Gulls.  A good count of 70 Goldeneye, of which 18 were adult males, and some of the female/immatures were showing signs of male feathering, also a male Pochard and six pairs of Gadwall were of interest.
A morning visit on Saturday 3rd March to Allerton tip produced an adult and at least two immatures, probable 2nd-years.  I was joined shortly after by Paul Irving and another birder who picked up an adult Caspian Gull.  Had scope views before many of the flock took to flight.  I went back again in the afternoon to see if the Caspian had returned but had no luck with any of the scarcer gulls, and due a heavy rain shower had my lights on...and left them on when I got to the tip.  Doh, flat battery.
Sunday morning at the tip and not many gulls at all, and none of interest.  In the evening, I tried Farnham again, and by 17:10 the only larger gull was a single 1st-year Herring Gull.  The only highlight was an adult Kittiwake in the roost, among eight Common Gulls and c.800 Black-headed Gulls.  Where have all the larger gulls gone?

Posted by Grampy Bustard at 18:28 No comments:

I was going to leave the Iceland Gull round-up to the end of the week, but this evening's visit to Farnham produced a 1st-winter Kumlein's Gull, present for 15 minutes or so, before the roost took to flight, and unfortunately it did not return.  This was by far the darkest most coarsely marked of all the immature Iceland's over the last 10 days or so, with a dark bill with only a hint of a paler base, brownish tertials, pale brown primaries with off-white edges forming neat chevrons.  No other Iceland Gulls there this evening, nor at Allerton this morning.  However, at Allerton there was a Ringed Plover there, and a Bar-tailed Godwit flew north over the site.
The Iceland's this week consist of just the one presumed 2nd-year Iceland Gull at Allerton tip on Monday 27th.    No visits on 28th, and then Allerton tip again on 29th, with an adult, two 2nd-year and a 1st-year Iceland Gull.  700 Herring Gull, 30 GBBGull.
Posted by Grampy Bustard at 19:05 No comments: