Yes I know, it was nearly a year ago I went on one of my dream days out by doing a pelagic trip off the west coast of America, but some months ago I was having a review of some of the hundreds of photos taken on the trip. Close inspection of some of the images discarded as not good enough actually provided me with two birds that had been called on the trip but not picked up by me, bothe being lifers.  When faced with so much photographic opportunity it is difficult to pick out odd birds in the melee following the boat, especially when trying to pick up on bill colour, size variation and flight pattern from a moving boat on a slight swell.

The two species are Black-vented Shearwater and Pink-footed Shearwater both of which were identified in very small numbers by others on the boat.  I have posted similar shots of confusion species to illustrate the differences.
The Black-vented is more Manx Shearwater size and has a dark bill and there are differences to the pale feathering on the underwing.

The Sooty Shearwater is very numerous in Monterey Bay but the Flesh-footed Shearwater with its pinkish base to the bill and slightly larger size does occur in small to moderate numbers.

Two armchair ticks, can't be bad....now back to work tomorrow so another lull in posting likely.

Posted by grampybustard at 15:52 No comments:

And the moth I could not put a name to...

By far the commonest moth that was attracted to light in Zante was a pyralid that although quite variable resembled something between a Rush Veneer and a Bee Moth.  It outnumbered all of the other species tenfold and once I realised that I was feeding the ants wondered whether this particular species may have been unpleasant tasting therefore skewing the numbers.  On closer investigation I saw several of these moths being carried by a single ant while still fluttering helplessly.  The size was variable and estimated at a wing length of 15-20mm.  A thorough scan of the images in Pyraloidea of Europe, Vol 1 and found some that really resembled my pictures and not only that were present in Greece which was encouraging.  It was Lamoria anella and a further search of images online seemed to confirm it, but as always I stand to be corrected! 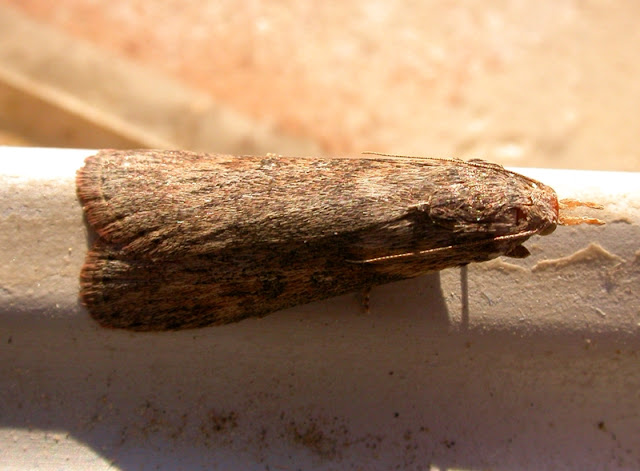 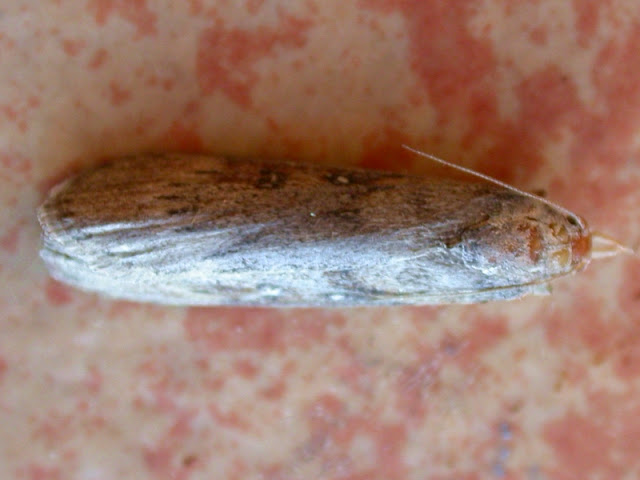 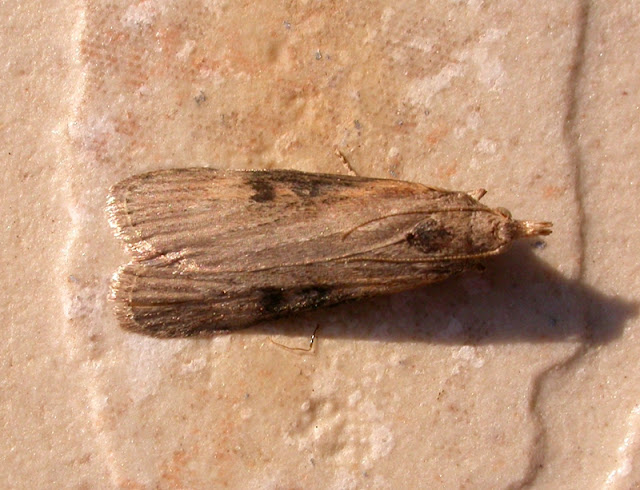 Posted by grampybustard at 11:35 No comments:

A week in Zante (part two)

One of my other interests is dragonflies and a couple of species did make it into the villa garden, a large Hawker sp. which was far too quick and a couple of Scarlet Darters, one of my favourite species.  It was not until the last afternoon that I found the one small area of standing water on the island near Keri, mostly reed-bed with a few dykes of fairly stagnant water, surrounded by housing and gravel tracks encroaching into the vegetation. It did yield a few dragonflies but not as many as hoped and quite difficult to photograph in a fair breeze.


This small oasis of wetland is in desperate need of protection from encroachment.  There is hope in that a species for which Zante is renowned, the Loggerhead Turtle Caretta caretta enjoys a remarkable amount of protection and education opportunities to the general public.  There are only a few beaches on this rocky island mainly in the south and these obviously are a magnet for the sun-seeking tourists too.  However, on entering the beaches, there are young volunteers from many countries advising all visitors to keep to the 5 metre strip closest to the sea, and to avoid the rest of the beach which were dotted with little wooden cradles covering known nests.  The island boasts c.750 known nest sites so far this year, located each night by the volunteers, the adults being measured and the nests marked for protection.  Fortunately, all the visitors kept to their narrow strip of the beach and one hopes that up to 100,000 eggs hatch allowing the young turtles to make it back to the sea. The mortality rate is high as they are fed upon by most species larger than themselves but those that do make it will return to their birth beach to breed themselves. 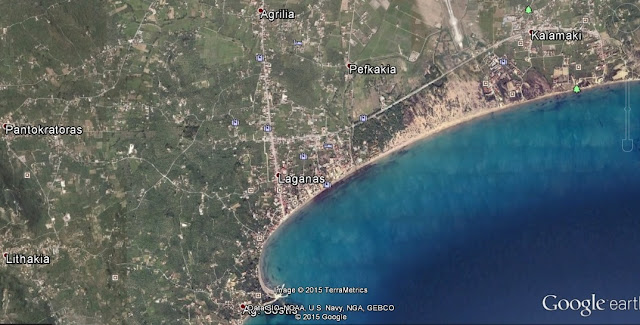 This image from Google earth shows the Laganas to Kalamaki bay in the south of the island, with the unspoiled beach hinterland clearly visible between Pefkakia and Kalamaki and under the flight path of approaching aircraft to Zakynthos airport.  Fair play to the Greek authorities and long may it continue; anywhere else in the world and it would have had hotels and tacky shops all over it.... Of course, there is money to be made from the turtles too: regular boat-trips into some parts of the bay are allowed, and there are limits to the number of boats allowed and how long and close the boats are allowed to approach turtles surfacing for air.  Initial views are often just blurry dark shapes the size of dustbin lids under water but are fantastic once they surface to take in some air. 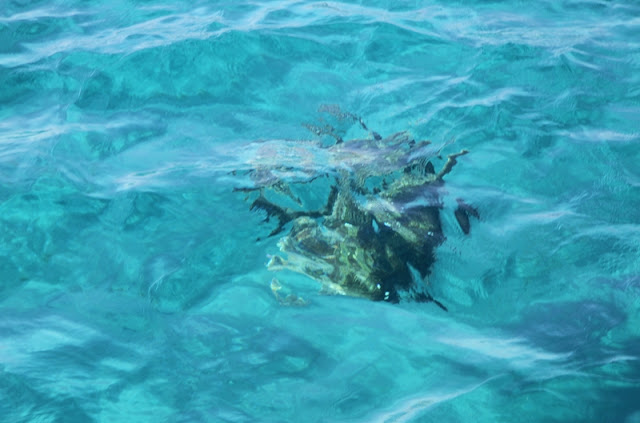 How times have changed.  Birds were the main reason for me walking out of the door and I never went anywhere without my bins, but on this trip played a very small part.  I can proudly present one of the most impoverished bird lists I have ever achieved:

Butterflies did not do much better.  There were plenty of Swallow-tails, Scarce Swallowtails, Clouded Yellows and others that were far to quick to see let alone net.  There were several Blue sp,, and a White sp. in the villa gardens but not one butterfly was ever seen settled.

I did, however, spend an awful lot of time scouring the skies for any high flying raptors, and doing my best to keep cool and hydrated.... 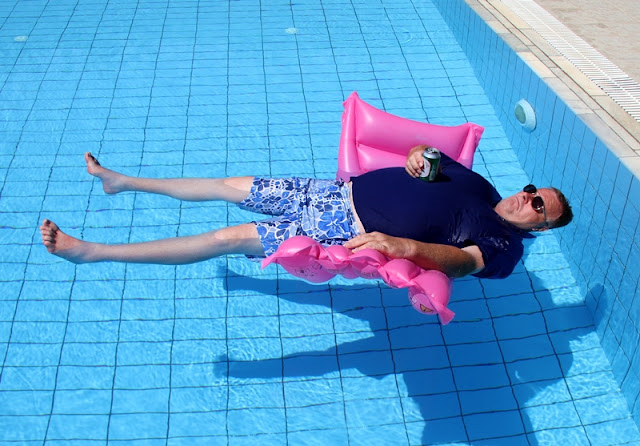 On a non-nature note there was a bit of an environmental disaster going on in the mountains above Kalamaki.  On the Monday night we noticed smoke rising from the hillside immediately above a mountain road.  The flames worked their way up the hillside with astonishing speed and the lone fire appliance looked on in vain.  A couple of hours later in the evening I could hear several turboprop aircraft in continual motion over by the airport and correctly surmised they may be fire-fighting aircraft.  They continued until dark and resumed next morning at first light and were watched with great interest from the Kalamki beach area.  There were three aircraft, all Bombardier CL-415 aircraft (Super-scooper) belonging to the Hellenic Airforce, 383 Special Operations & Air Fire Fighting Squadron (383 MEEA).  They did several hours of continual circuits scooping up sea-water from about a mile out, flying back in over the coast and sweeping round dumping their load on the hillside fire. 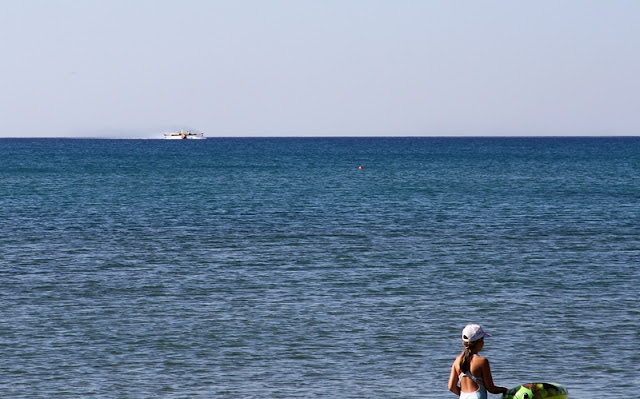 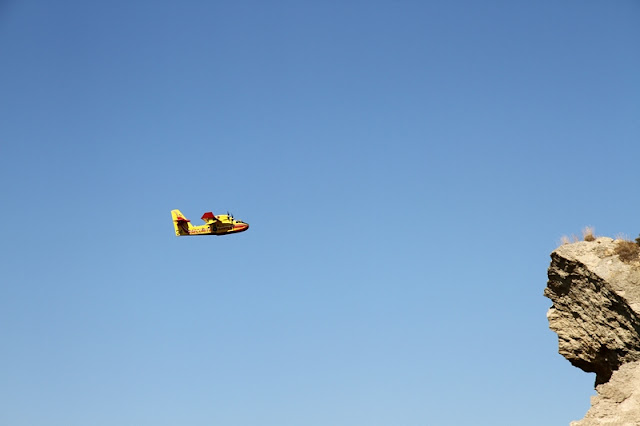 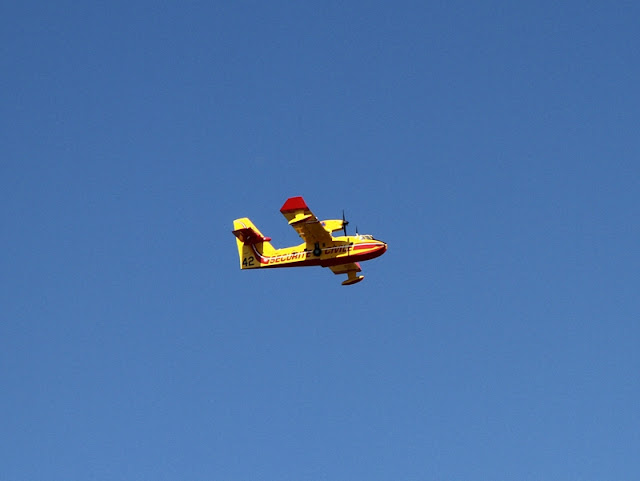 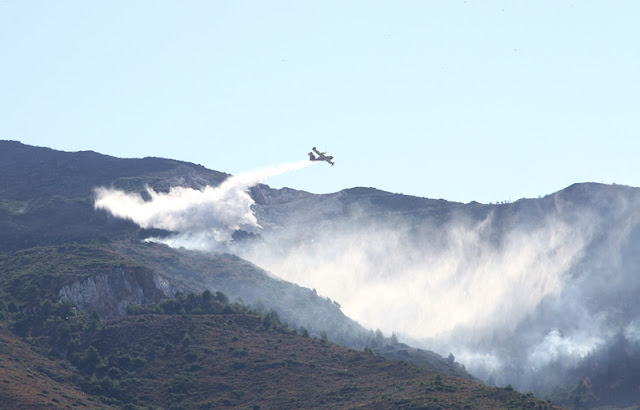 To finish off these short notes I add a couple of photos of one of the Islands attractions, of what is the largest Greek flag anywhere in the world atop a 50m pole. 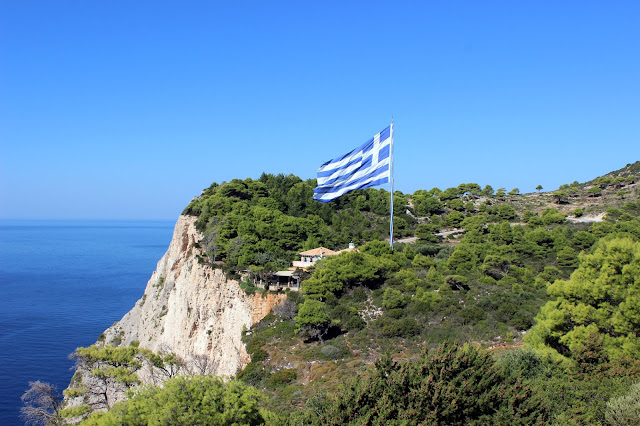 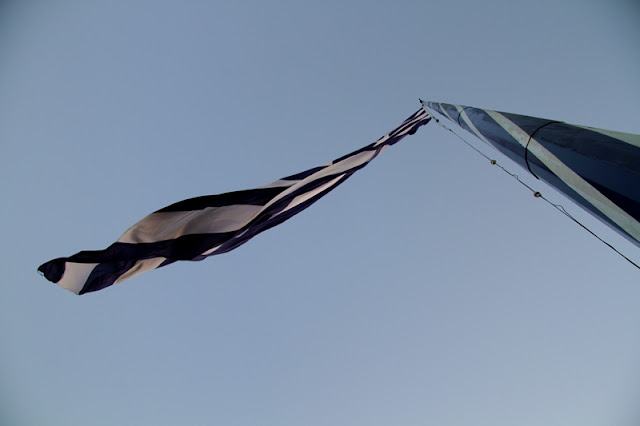 A week in Zante (part one)

Having worked too hard for so long with so few days off it was fantastic just to get away to the sun with the family for a week on this Greek Island.  Of course with all the media hype over the state of the Greek economy and with deadlines coming and going it was difficult to imagine what awaited. Were there going to be strikes, civil unrest, empty supermarkets, no cash for change to purchases, VAT hike hitting all prices, tourists being mugged for their extra cash, and the rest.....   Not one bit of it!  A very pleasant green island, not too many tourists and those that were there were mainly from other European countries like Poland, Sweden, France and Germany with not too many Brits.  The shops were full and had no problems at all; perhaps heeding the tourist advice to take plenty of cash and not to embarrass anyone by offering credit cards did the trick.

A great villa with own pool near Lithakia not far inland on the south coast, quiet and secluded but close to amenities.  Usually 34-36C but up as far as 38C daytime temperature with wall to wall blue sky all week until day 6 when a distant towering cumulus appeared on the horizon and several scattered cumulus on day 7, but not anything to prepare us for just 15C and rain at Manchester Airport. 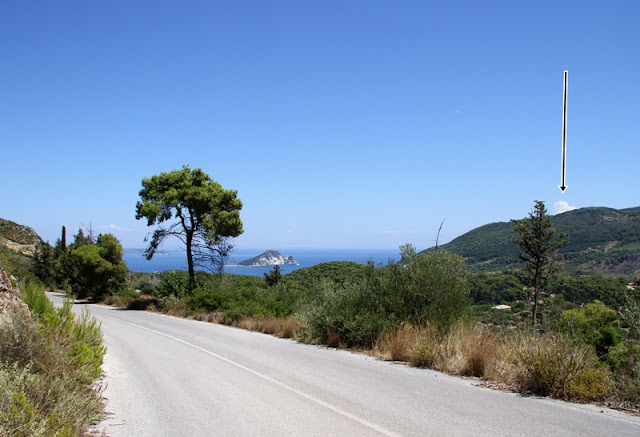 This was the first trip abroad that I did not bother with my proper Leica bins; perhaps an indication of where my interests lie these days I took my ultra close-focus 8 x 20 Pentax which are much more useful for insects while still being able to pick up birds further away.  I took an 8w actinic with a super battery (but forgot the Safari trap) and also my MBTF blended bulb (does not need the bulky and heavy control box); I used the MBTF suspended over the patio most nights but awoke each morning to find very few moths.  It wasn't until I looked during the night and found that the few moths that were attracted were being pounced upon by the local ants and been carried off struggling. The ones that did make it through the night were of only a handful of species, and several of those I had seen in the UK.  The most common moth (numbering no more than 20 a night) was a Rush Veneer type moth, one still to be determined.  Next in number was Palpita vitrialis (up to 5 a night) and one I have encountered several times in Dorset.  There were several Blair's Mocha, a Vestal, a Small Blood-vein, a half-eaten Beauty of some sort, a Golden Twin-spot and an Aporodes floralis the last two were new species for me.

The best moth of the trip was not attracted to light but was one Nattie found in the villa saying she had seen a large black moth (but perhaps not quite so delicately..) and I eventually found it and potted it the next evening. Obviously a Crimson Underwing sp., but which one?  My copy of Townsend and Waring showed Light Crimson and Dark Crimson Underwing but the Minsmere Scarlet Underwing was not illustrated.  A quick google looked promising but then again confusing - some images good for 'Minsmere' while others so labelled were mis-identifications; I think I trust those from the Suffolk website and a Bulgarian one.  Despite the ludicrous name attributed to a Mediterranean and near Asian species that just had the misfortune to straggle to a Suffolk reserve in 2004 (it could so easy have been Harvey's Crimson Underwing which is just as questionable), I am happy that it is that species Catocala conjuncta and remains one of my favourite families.
The most obvious yet extremely difficult to see insect were the ever-present Cicada.  From sunrise to sunset the buzzing chirping was almost incessant and always loud.  The rhythms at times would coincide to make a constant buzzing rather than strident chirping and it took me several hours to track one down.  Their camouflage was extremely good and when on the rough bark of the olive trees blended in very well.

A cracking beetle which I rescued from the pool was kindly identified by my mate Andy Pay was a Pine Chafer, almost 40mm in length and would certainly make a mess off the windscreen...
...part two to follow
Posted by grampybustard at 15:41 No comments: