Another decent night forecast for Saturday 18th August and traps set at the furthest hide at Staveley.  Not a bad haul in the end with 574 moths of 82 species, with just small numbers of the target reed-bed specialities: 17 Limnaecia phragmitella, one Chilo phragmitella, two Calamatropha paludella, 15 Water Veneer, a Southern Wainscot, three Bulrush Wainscot, one Brown-veined Wainscot and a Fen Wainscot.

So, where's the conundrum?  I caught a Mompha that I was perfectly happy matched one that we had caught there a couple of weeks ago.  However, there were two other white-headed Mompha that defied easy identification.  A trawl of the internet suggested Mompha divisella only recorded once in Yorkshire as a willowherb plant gall, obviously a rare moth but I kept coming back to the same conclusion.   Several opinions from learned colleagues seemed to support my thoughts so I forwarded the details to Harry the County micro-recorder.  While waiting for his reply I checked MBGBI and the illustrations there made me even more confused.
Harry came back with the opinion that it was Mompha propinquella, which suggests to me that some of the published photos of divisella may actually be incorrect, and that gen. det. is required to be sure.


Posted by grampybustard at 14:49 No comments:

The heathy bit of Pilmoor

A slight change in venue for Tuesday night, three traps out on the heath bit at Pilmoor, set among the cross-leaved heath and rushy areas, so slightly different habitat.  It turned out to be a pretty reasonable night with 820 moths of 103 species, many birch-feeding species including several new ones for me and a few new for Pilmoor.


For once the forecast was spot-on, a fine clear night, muggy with little or no wind, a beautiful dawn with a hint of mist hanging over the marshy bit.  Sure enough the cloud rolled in and rain and wind later in the day, so at least I had taken advantage of the fine window.

There were plenty of Siskins flying around calling, and a wonderfully evocative Whimbrel was heard calling as it flew over.  A few days rain and wind with hopefully a fine weekend coming up.  Trapping peak about over now, so must take advantage as and when.  August is probably the worst covered month for me and could be due to a number of factors: the odd weeks away are normally in August, the weather is often poor, and fatigue setting in feeling all 'mothed out'.

Posted by grampybustard at 12:33 No comments:

I caught a rather dull grey plume moth at Staveley on Friday night, took two crap photos the following morning before it made a dash for freedom, straight through the gap in the slightly ajar window...   So trying to match the little blighter with various books and web photos, I eventually settled on Oidaematophorus lithodactyla or Dusky Plume as it is called in Sterling and Parsons.
Fortunately Charlie agrees, him having had one there in 2008, only the second VC64 record.  The wing markings are rather subdued, but can just be made out, and the grey tufts by the spurs on the front two pairs of pale legs a good pointer.
Posted by grampybustard at 21:42 No comments:

I make no apologies for yet another visit to Staveley; it really is a magical place, if hard work.  Having done the woodland end last week, it had to be the reed-bed end this time.  I was rewarded with a new macro, a Butterbur,  a scarce moth nationally, the Yorkshire population of some importance.


Lastly, here is a selection of the very variable species Epinotia nisella, some of which had me excited for a while until I realised they were the same species. 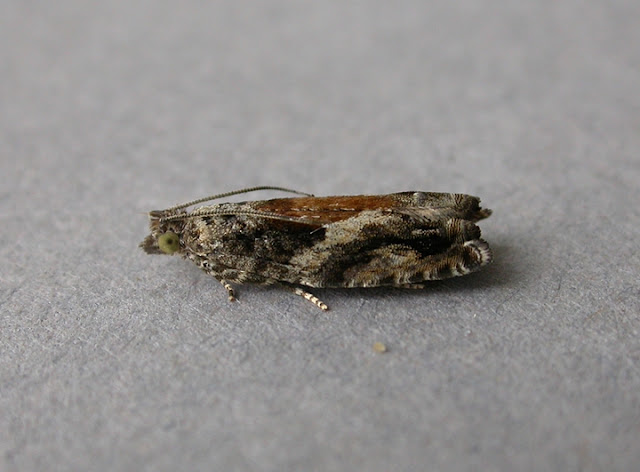 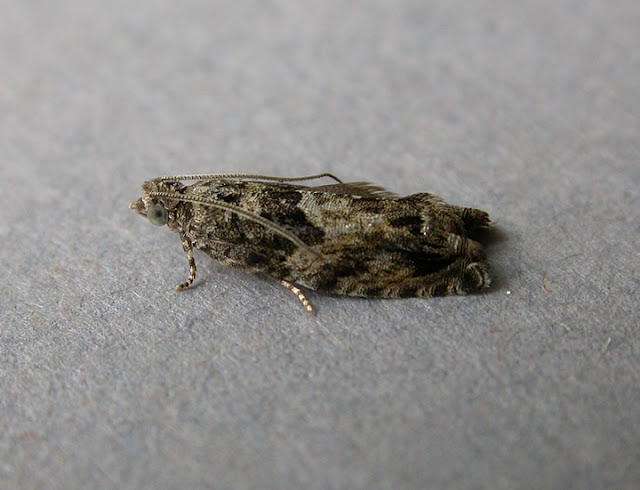 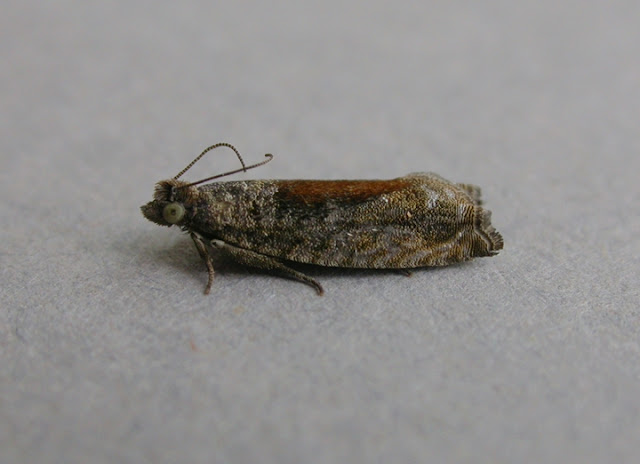 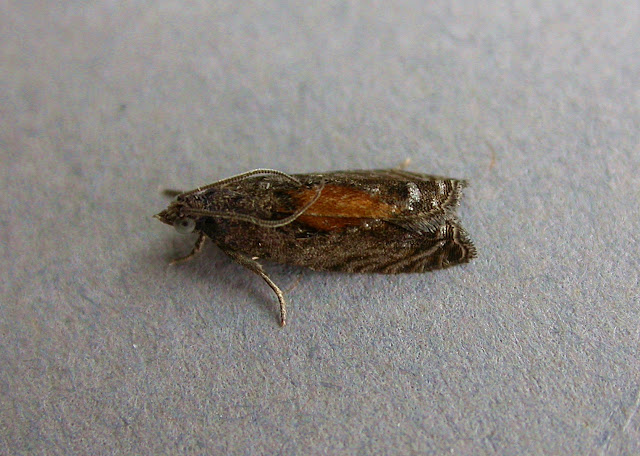 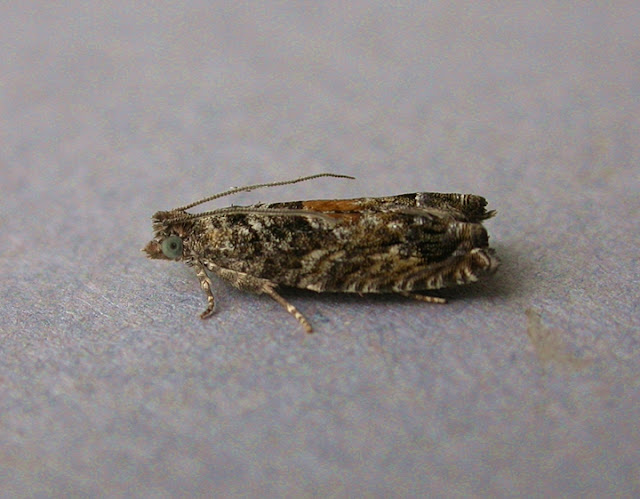 Posted by grampybustard at 20:58 No comments:

Avoiding the rain at Staveley

A belated post for a trapping attempt at Staveley on night of 4th August.  Having been suckered by the inaccuracies of the ever-changing weather forecasts and heavy rain over the previous two nights, I hung on as late as possible, looking at the lightning radar to watch where the activity was and the chances of avoiding the heavy showers.  So late on Saturday night I went for it and set up a couple of traps near the cairn at Staveley, one on the open grassy area and one in the wooded path next to some bulrushes.  A pleasant if slightly muggy night and a fairly modest catch compared with some recent attempts, with 266 moths of 57 species.  One new micro, a Teleiodes vulgella, and a selection of fairly common and photogenic others.

The forecast for the coming few days looks very conducive to some more trapping, which is good in that I have not done any trapping in Yorkshire for this 7 day period since moving here six years ago, indeed August as a whole is under-recorded generally.
Posted by grampybustard at 09:53 No comments:

Having taken photos of the Himalayan Balsam on the canal cut at Langthorpe, I actually missed another Asian introduced pest plant, which is only now coming into leaf.  The naked spikes of the Japanese Knotweed are plainly visible in the second photo on 27 July, but these are now in leaf and rather more noticeable.

This is another species introduced from Asia as an ornamental plant, this one from Japan in 1825.  Unlike the previous two species, this is not spread by seed dispersal, but as a rhizome, where just 1cm of root in the soil can become a plant within 10 days.  It is a pernicious pest, and the roots cause damage to paths and walls, while the foliage shades out other vegetation.

The young stems are eaten in Japan, a sour taste similar to rhubarb, but also contains Emodin which has laxative qualities....
Posted by grampybustard at 11:36 1 comment: