A few Orthosias at last.

Probably the warmest day of the year so far and a warm night despite clear skies, so I spent a couple of hours with a light over a sheet and the Gladiator at Pilmoor.  Some good numbers and the first of the spring moths, with several orthosias.  Small Brindled Beauty was a new one for me in Yorkshire, but escaped while trying to pot it for photographing.

Following on from Tuesday's success, I have spent some time this week looking at gulls and feel quite fired up about it. With so many Iceland Gulls in the country at the moment and a report of a Kumlein's Gull at Allerton, the  opprtunities are there to see some good birds.  Rather than lots of entries, here is a resume of five days of gull-watching.


On Wednesday 22nd Feb I tried Farnham Quarry again on the evening, just to make sure I wasn't dreaming on the Tuesday; although the larger gulls were quite late in coming in, both adults and all three 1st-years eventually came in to roost.

On arrival, I was greeted by brief views of a probable 2nd-winter Glaucous Gull, but before I could get my 'scope on it, all the gulls flew up, spooked by two Red Kites flying over the site.


Observations over the next couple of hours came up with three 1st-winter (or possibly 2nd-year) Iceland Gulls.  Two were invariably together, the third and largest bird was always apart.   Very few larger gulls around by 16:30, so suspect this is more of a day-time loafing site rather than a roost.  I wonder if these Iceland Gulls are the same that roost at Farnham?
On Friday 24th Feb morning, in intermittent drizzle, I tried the tip again for a couple of hours.  No Glaucous Gull this time, but at least five immature Iceland Gulls in different stages of advancement.  When the sun eventually came out the light was excellent, and reasonable views were obtained of the gulls.  There were two what I would consider standard 1st-winter plumage, albeit pale; two more with an almost pearly pallor, with hardly any buff mottling, pale eyes and pink-based bills which were probably 2nd-year birds; one very small individual, probably 2nd-winter, with faint traces of chevrons on primaries, recalling Kumlein's Gull, but considered to be Iceland.


An adult Kittiwake was also of note and a large, lanky white-headed gull which recalled Caspian Gull had me going for a bit.  Not entirely convinced, but certainly a striking looking long-legged bird.

A couple of hours on Saturday 25th Feb morning produced a biscuit-coloured 1st-year Glaucous Gull, and at last a superb adult Iceland Gull with three 1st and 2nd-years.


In the evening on Saturday, I watched the roost at Farnham Quarry, and very few larger gulls about, less than 150, but did include a pale 1st/2nd-year and an adult.

On Sunday 26th Feb, again spent an hour at Allerton, and managed two 1st/2nd-year birds at range, until all the gulls were spooked by some kids after rabbits.  Some minutes later, another or same was seen in flight over the site, but the gulls just would not settle again.
In the evening, even fewer larger gulls at Farnham Quarry, probably less than 50 by 17:00, but did include a 1st/2nd-year Iceland.  It was one of those evenings where if someone had come along to see all these gulls, it was a case of  'you should have been here a couple of days ago...'
Posted by Grampy Bustard at 18:56 No comments:

Following the visit to Farnham Gravel Pits near Knaresborough at the weekend, when there were not as many large gulls as expected, I tried again this evening.  It certainly paid off, as there were many more larger gulls, at least 1500 Herring Gulls, and among them were FIVE Iceland Gulls.  They included two stonking adult birds, and two, almost certainly three 1st-years.  The uncertainty only due not being able to get all three 1st years in the same sweep of the scope, but were distinctly spread out enough to be more than the two.
In addition, at least five Great Black-backed Gulls, ten Lesser Black-backed Gulls and two Yellow-legged Gulls.  Concentrating on the larger gulls, I would just estimate 2-300 Common Gulls, and 3000+ Black-headed Gulls.  No sign of the Kittiwakes...but I am not complaining.
Posted by Grampy Bustard at 18:56 No comments:

In common with the previous last few years, I have had a look at target squares for the coming season.  In addition to squares with few records, I have identified a number of species that I would like to find in Yorkshire, most of which would be new to me.  To help me with this, I have an excel sheet with all the hectads for the VC's 61-65.  The small number at the top of each square is the number of species recorded in each square from the Yorkshire database, and those in grey are the squares with less than 100 species recorded.   The larger numbers are the number of species I have recorded in each square, and the colour coded squares were under-recorded squares I have targeted over the last three years.  This has proved most rewarding for the pale blue squares which now have respectable totals including some very good moths.  The pink ones were those for 2011, which received some coverage in that year, but I have carried them over to 2012 to try a bit harder. 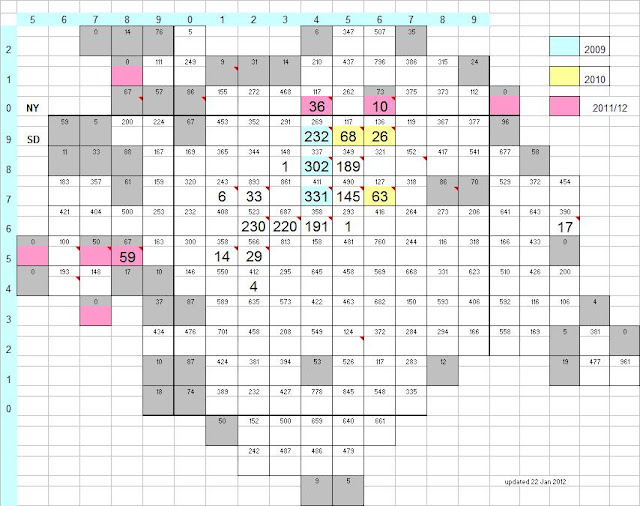 As for some of the species I would target, I have interrogated the Yorkshire database and come up with some maps, to give me an idea when and which areas to target.  I do not hold out too much hope, but if you don't look you don't see, so let's just see how we get on....... 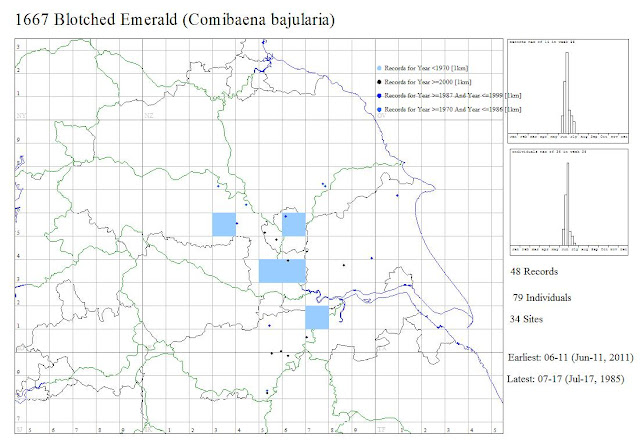 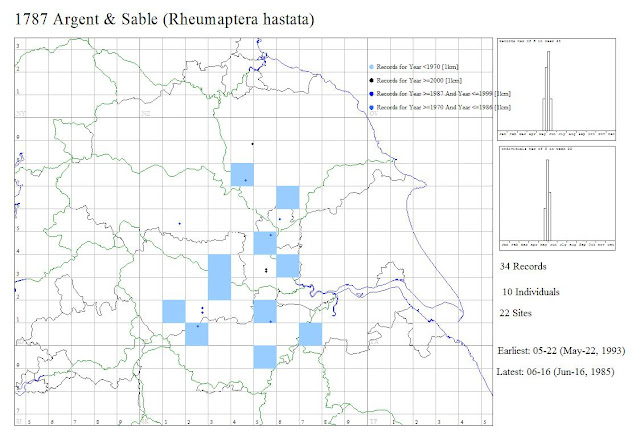 Time for some gulls

With all these white-winged gulls having being pushed into the UK in some numbers, and hearing of an Iceland Gull at Nosterfield, I decided to give one of the gravel pits near Knaresborough a grilling last night.  The pit closest to the golfcourse and part of the Farnham complex is well placed to watch in the evening light, and attracts several thousand gulls to roost.  Surprisingly, there were far fewer of the larger gulls that were present a month or so ago, but there were at least 40 Herring, 1 Greater Black-backed, 300 Common Gull and 3000 Black-headed Gulls.  Despite scoping the flock for 90 odd minutes, the best I could come up with was an adult Yellow-legged Gull and two adult Kittiwake, which unfortunately were far too far away to photograph.
So while talking about gulls, it does allow me to add a photo of the Glaucous Gull I saw in a flooded field south of Boroughbridge, on 16 April 2009.
Posted by Grampy Bustard at 08:57 No comments:

First mild night for a while...

With the increase in daytime temperature and a reasonable, if breezy, forecast for the evening, a couple of hours with the 160MVB over a sheet at Pilmoor beckoned.  The temperature remained at 8C, although there was still traces of rutted snow on the track, and the track was rather wet underfoot.
In addition to the lamp and sheet, I used the 2 x 22w Gladiator and promptly managed to blow one of the bulbs, but it still did ok with just the one bulb.  The total catch in 2 hours early evening produce seven Tortricodes alternella, 15 Pale Brindled Beauty, and four Spring Usher.
Posted by Grampy Bustard at 11:03 1 comment:

A wander round a wintery Pilmoor

Having safely received my written permissions for trapping from Natural England and the landowners for Pilmoor, I decided to have a walk round the SSSI and old railway track.  A cold crisp morning, still below freezing, which felt worse once the mist lifted to hide the sun, and with up to three inches of snow blanketing the heath. 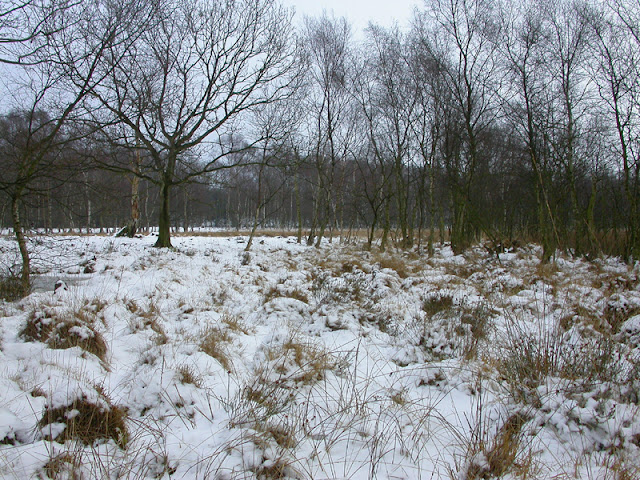 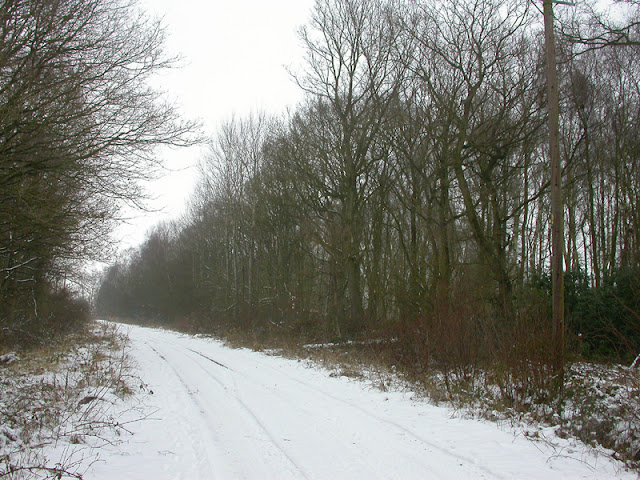 The best bird was a Red Kite flying over on motionless wings, while a flash of orange showed an amorous male Goldcrest trying to impress a female while circling her on a silver birch trunk.  Plenty of Long-tailed Tits, none with white heads, despite looking....dozens of Siskins feeding on the birch buds, and the odd Reed Bunting  acting sentinel on the tops of trees. 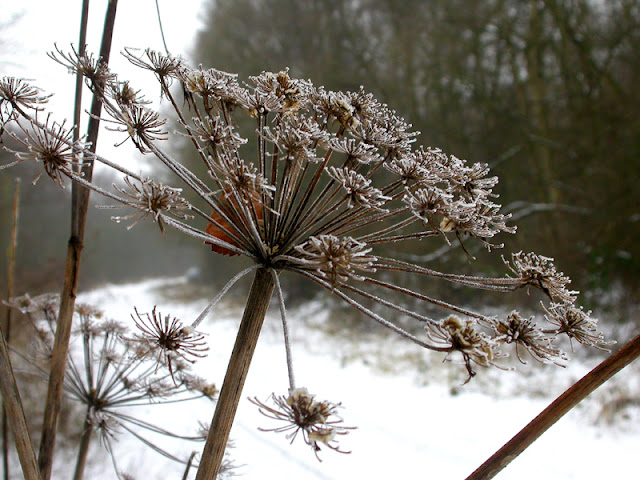 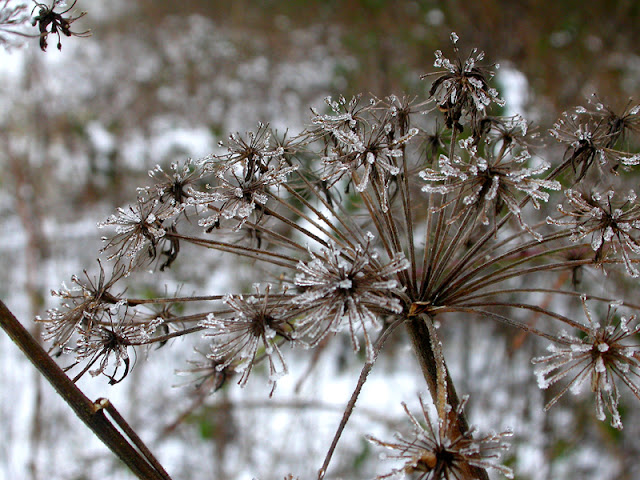 The most impressive sight of the morning, was the number of Seven-spot Ladybirds huddling on the dried-out umbellifers and on a tall thistle; at least 40 were counted.
Posted by Grampy Bustard at 14:13 No comments:

Another year gone and more magazines in need of binding…..  A sobering thought that I have been subscribing to British Birds since 1975 (37 years), and have amassed decent bound copies back to 1946.  With trips to and in 1978, 1982 and 1983, I developed an interest in the area, and took Sandgrouse from the early days.  I suppose Birding World comes next, having subscribed halfway through the first year, now in its 25th Volume.  I subscribed right from the start with British Wildlife, although lapsed for several years, volumes 7 - 10, but am current again, and managed to get the missing copies.  Atropos, a relative newcomer, but is probably the most eagerly anticipated.
British Birds                1975 – date, 70 volumes, back copies to 1946
Sandgrouse                 1980 – date, 33 volumes unbound
Birding World              1988 – date, 25 volumes
British Wildlife             1990 – date, 23 volumes
Atropos                      1996 – date, 8 volumes
Several other magazines have come and gone, but I feel that those currently on subscription are the leading magazines in their field, and I eagerly await them dropping through the letter box.  Of course, the main problem in being a bit of a bibliophile is storage, with at least 75 feet of shelving just for natural history books!  There are a few more of reference type books and biographies, and there are still a few boxes stored in the loft which have yet to see the light of day in . 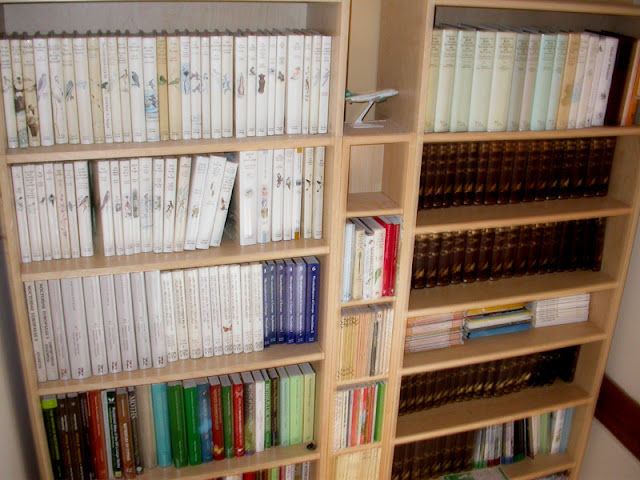 The cost of books is a major concern these days, and several series I am collecting are about to publish new volumes in the £75 to £150 range.  However, probably the best value series is The Encyclopedia of Swedish Flora and Fauna which aims to cover c.40,000 species, and although in Swedish with English summaries, is fantastic value at around £50 per volume; I have the ones covering the moths so far, and also the hoverflies and one or two selected others.  Perhaps my favourite book is the Dragonflies of Ireland, with stunning photographs by Robert Thompson, and heavily subsidised by the Irish authorities; it was so good, I bought two! 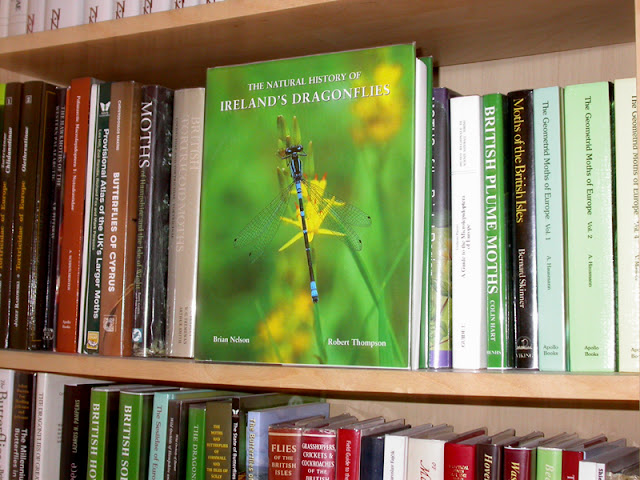 Books that have appreciated greatly or were picked up for reasonable amounts would include the Collins New Naturalist book on The New Forest, bought in Bournemouth the day I was offered a job in Dorset, and is currently worth ten times what I paid for it; the Jenni and Winkler Moult and Ageing of European Passerines, first editions recently sold for 20 times what I paid for it.  A bargain at a boot sale got me a copy of the The Flies of the British Isles by Colyer and Hammond, which at £2 for a first edition with a small library stamp and fine dust-cover could easily command much more than that, while being a useful reference source. 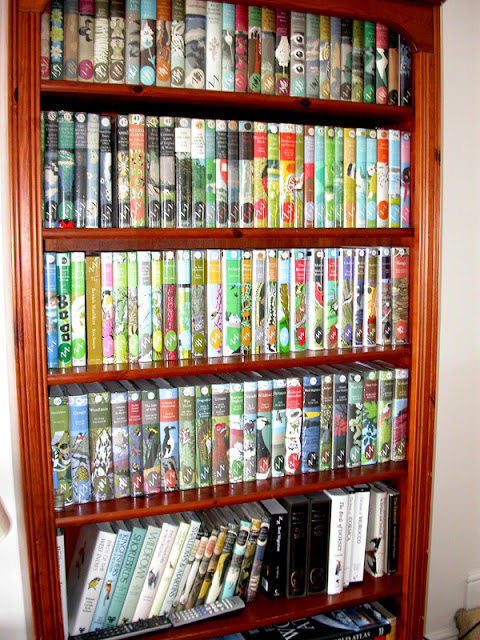 I just do not believe that the internet and digital copies will ever fully replace good books.  Although I had a copy of the Ray Society British Tortricoid Moths on CD, I jumped at the chance of buying both ‘real’ volumes early in 2011.  You cannot beat the feel and smell of a good book, and if selective, can be a good investment.  I am sure I have will have a much better return on my books than similar outlay invested in the stock market, and more importantly have had the benefit of enjoying them and referring to them during that time.  Unfortunately, like buses, good books all come along at once! 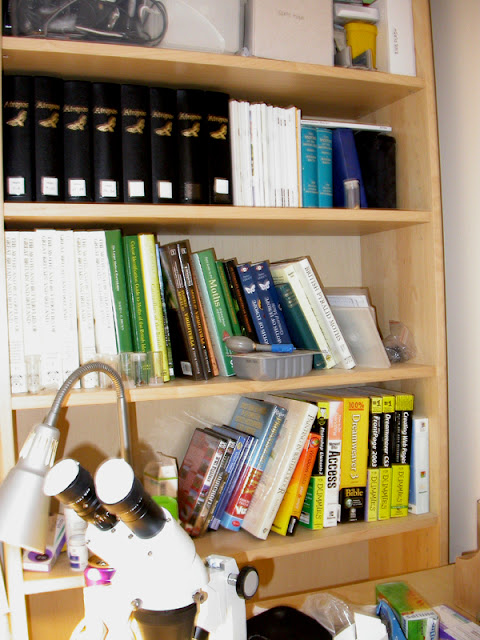