Birding a local patch - a reminisce

I moved to Somerset in the spring of 1974, as a very green spotty youth, lodging with an elderly lady  in Barrows Croft Road in Cheddar, or living with an 'older woman' as I liked to claim. Being too young to go to the pub and women still a bit of a mystery, I purchased a second-hand racing bike and a trusty pair of 8 X 30 Russian bins, and escaped from my landladies knitting and yappy dog by visiting Cheddar Reservoir.  I had done very little birdwatching before, and never to my knowledge met another real birdwatcher.  I stumbled across the log book which was kept in the cupboard in the toilet block at the Cheddar entrance, and was amazed at the birds which were reported there with such regularity, especially by one particular observer.  It was some months before I met another birdwatcher, and naturally we got talking.  I expressed with incredulity, that someone with the initials BR seemed to see lots of birds there, and I wondered whether he was making them up.  Brian Rabbitts introduced himself to me, and if my memory serves me correctly pointed out the Slav Grebe that had been there for ages, but I had never seen.  The next time I saw Brian was when he called me about a Temminck's Stint, which with the Sanderling were both new birds for me.
At last I began to see some of the birds that previous County Reports listed as turning up, and there followed a series of good autumns with numerous vagrants such as Whiskered Tern, Buff-breasted Sandpiper, White-rumped Sandpiper, Wryneck and American Wigeon.  My meagre list started to mount up, and I started to travel further afield, but always returned to the reservoir for local watching and enjoyment.
Having got hooked on birdwatching, I went through periods when I visited the reservoir almost daily, especially at peak times, and sometimes as many as three times a day.  There were other times in periods of general malaise with the reservoir after far more exciting trips abroad, and it might be several months before I could drag myself to go there again.  It was amazing that each time I visited the reservoir after such periods of indifference my enthusiasm was immediately rekindled on my first visit by sightings such as a flock of Common Scoter, or a Black Redstart, and even a Glaucous Gull, which were like a 'welcome back' to the place.
The visits in the early years were often an adventure.  In those days it was access by permit only, and it was a challenge to make a successful visit without being accosted by the Bristol Waterworks caretaker on his bike.  I started riding my bike round too, so that if he arrived, I could see which way he was riding, and I could at least ride in the other direction.  My first couple of years of anarchistic lawbreaking, were replaced by a period of relative respectability by being the official BTO 'duck-counter', which meant a complementary permit, but was not half as much fun!
This was all to change as years went by as access was relaxed enough to let people in without challenging them, to the late 1980's when access became totally unrestricted, and it became a running track for health freaks, and a dog-walking arena, for the more sedate.  The new challenge for me was to manage a complete circuit of the reservoir without having to extract something rather unpleasant from my commando soles.  So incensed was I after one particular visit, I actually sat down and worked out how many tons of faeces were likely to be deposited at the reservoir in a particular year.  However, on reflection, this probably paled into insignificance compared with the tons of duck and coot droppings deposited into the drinking water...... 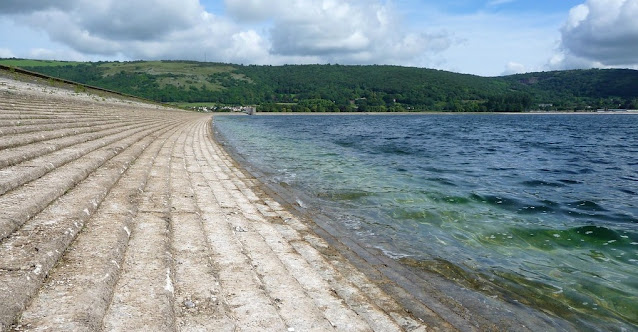 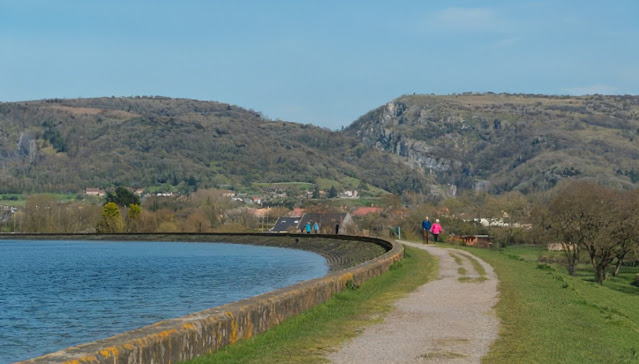 It was always a pleasure to visit the reservoir without being disturbed by anyone else, something which was much more difficult to do in later years.  You could arrive at the reservoir knowing that you were likely to be the only one there that day, and the birds on it were your own.  As one breasted the parapet a quick scan would confirm you were the only one there, but increasingly other 'regulars' would appear.  Most became friends, while the occasional others were to be avoided at all costs.
It is difficult to say which scenario gave me most pleasure: the pleasure gained sitting on the south side, with Green Woodpeckers and Little Owls calling away, and looking over the calm waters on a sunny evening, with the Mendip hills as a backdrop - very therapeutic.  In Autumn the excitement generated by the very distinctive smell of drying weed, meaning the water level had dropped and in a good year sandy islands, with the potential of finding good waders.  Spring was always welcome wit the first flush of migrants on a sunny Spring morning, contrasting the pain and frostbite endured scanning the winter gull flocks looking for rare gulls.
Although enjoying other people's birds at the reservoir, at last I started finding my own there, and nothing gave me more pleasure than me actually ringing the highly revered Rabbi with news of my finds.  I was lucky with a couple of Wilson's Phalaropes, Buff-breasted Sandpiper, Temminck's Stint, American Golden Plover, Green-winged Teal and Ring-necked Duck, and scarce visitors like Little Auk, a couple of Little Egrets, several Ospreys, Red-necked Phalarope, three species of Skua, and other oddities.  I had White-headed duck among the numerous Ruddy Duck, other species including Marbled Duck, and various escapees such as Flamingo, which always added interest.

Having amassed a reasonable Cheddar list over the years, I was always grateful for calls concerning 'new' birds, and need to thank James Packer for Firecrest and Iceland Gull, and the Rabbi for numerous others.  Of course, there were several records which did 'get away'.  I could kick myself for the Broad-billed Sandpiper sitting motionless on one of the islands, which after 20 minutes of inactivity suddenly disappeared as I briefly looked away.  Or the early May Short-toed Lark which flew only feet above my head calling, and flew out of sight towards Shute Shelve. I was confident in having spent many hours in close contact with the larks in Cyprus. I even rang my best mate in Cornwall to tell him, and guess what, he had seen one too on the Lizard, one of about five which made it to Britain in a five day period.  There was the Richard's Pipit which the Rabbi saw after leaving me sitting on one side of the reservoir, and I am sure I remember him waving, and being a friendly fellow I just waved back, before leaving. Doh!
Gulls became one of my main interests, especially after finding Mediterranean Gulls fairly regularly.  Good numbers of Yellow-legged Gulls, and darker races of Herring and Lesser Black-backed Gulls, a very dark small slender Baltic type Lesser Black-backed, and a couple of Ring-billed Gulls, and several hybrid or oddly plumaged birds, including a Mediterranean X Black-headed Gull and leucistic Greater Black-backed Gull.
Cheddar always seemed colder than anywhere else, and after scanning the winter gull flocks, one often left bordering on hyperthermia.  I started using a foam mat to sit on, so as not to get a touch of 'Cheddar bottom', and although possibly open to ridicule, at least I was always the comfortable one with a warm and padded seat.  It fitted neatly in my Barbour inner pocket, and became to be considered as essential as the telescope and tripod.  The lack of cover sometimes meant getting caught out by heavy showers; you could see them coming across the Axe valley, and always seemed to move faster than I could.  The removal of two sheds on the Axbridge side, meant the loss of cover during westerly gales, making looking for windblown seabirds that much harder.
There were always the times to curse the joggers who flushed the waders before you got to them, and the fishermen who left many yards of line and discarded hooks, and litter and dog faeces everywhere, and the yachtsmen and wind-surfers, well, the less said about them the better!  The hot-air balloon which scraped its basket along the main island as target practice, scaring off every bird on the reservoir, before drifting off into oblivion.  There was the time I walked round the reservoir, and for fun walked back round; on returning to my car I tried all my pockets several times, but could not find my keys anywhere.  I walked back round the reservoir for the third time scouring every inch looking for my keys, without any joy, and had to walk back to my house in Cheddar Village.  I put my hand in my pocket and pulled my keys out to open the front door; they were there all the time!  I walked back to the reservoir to pick up my car; what should have been a pleasant stroll turned into a major trek.
I also have many fond memories of the place.  Wading out thigh deep in the mud with Jeff Hazel to grill a strange looking 'peep', and discarding the wellies on the way back to make it easier to walk.  There was the time I stopped one of the joggers, and asked him to tell the birdwatcher on the other side of the reservoir that I was looking at a Little Egret in a creek, which he could not see, and the mounting excitement as the jogger got closer to the watcher, who when told started running faster than the jogger!  The time I watched a particularly unrestrained yachtsman leaning out so far from his boat, and getting so close to the buoy, that there was a resounding 'boing' as he made cranial contact with the aluminium beer-barrel masquerading as a buoy.  The numerous enjoyable birds were crowned by my best sighting of a juvenile Marsh Sandpiper which gave a fleeting visit before moving on up to Chew and Blagdon, and remains the only Somerset (the 'old' new Somerset?) record.  There were many hours of pleasant conversation with good friends, and pleasant scenery all around, which helped me unwind, and was fabulous therapy in stressful times.
In the 24 years of visiting the reservoir I saw well over 200 species there (c.85% of the full Cheddar list), and my best year there gave me 123 birds.  I always regret missing some of the visitors, like Hawfinch, Hoopoe, Long-tailed Skua, and could never understand how White-winged Black Terns always seemed to avoid the place during this period.  I moved from the area in August 1998, and have since moved to deepest darkest Dorset.  However, while attempting to do my regular Rook survey in ST45 in March of this year, I visited the reservoir for the first time in 18 months, in the hope of seeing an early Sand Martin.  I was rewarded with Somerset's second ever Franklin's Gull, and the irony of finding arguably my best bird there after not being there for so long was very apparent.
There is a lot to be said for having a 'local patch', and I miss the reservoir and its birds dreadfully.  I do, however, having moved to pastures new a whole new arena in which to find my birds, and starting off from 'nought' again has many new challenges. The thought of wandering around locally, in the knowledge that I am most unlikely to meet any other birdwatchers, and that even commonish species are 'new'.