Following the very belated posting covering the computer crash through to the end of the year, who would have thought it could get worse....  In December I was diagnosed with esophageal cancer which caused a period of great uncertainty and putting annual subscriptions on hold; various scans suggested it was treatable and I was booked in for four sessions of aggressive chemotherapy.  Then as a vulnerable person I was on total self isolation with my family, with the general lockdown just before my last dose of chemo.  My operation due late April was cancelled and I was put on lower dose tablet chemo until my operation was rescheduled for mid June.  The op and subsequent recovery went extremely well and actually got back to work a month ago.

I just cannot use the excuse of not having enough time but it is a matter of priorities.  I used much of the lockdown time assembling an up-to-date Atropos magazine index, some 2600+ pages to scour, and having done most of it I just need to finish off, check it and format it.  I have re-labelled the Yorkshire Moth website photos in preparation for the planned update by MapMate to cope with the new numbering which is currently holding the website data updates back,

Initially I was rather down about the prospect of just trapping at home, but I did manage some trapping at my private site at Brafferton (VC62) where I 'exercised' at night on my own, probably safer there than anywhere.  Following subsequent generator malfunctions I reluctantly started trapping on my parking spot at home in Langthorpe (VC65) and was pleasantly surprised at the results until wasp infestation brought things to a halt in September.

As a result of this rather fractured and stop/start recording this year, I will just just pick out the highlights to get back up to date.

The first period of trapping was 16 May to 1 June, 8 nights in total all at Brafferton VC62, with 1550 moths of 130 species.  Highlights were 95 Grey Pine Carpets, 53 Poplar Hawkmoths and 98 Orange Footman.  The best night was 20 May which was excellent for scarcer Ancylis moths with examples of the rare Ancylis laetana and Ancylis upupana, and Ancylis myrtillana well away from upland heath. 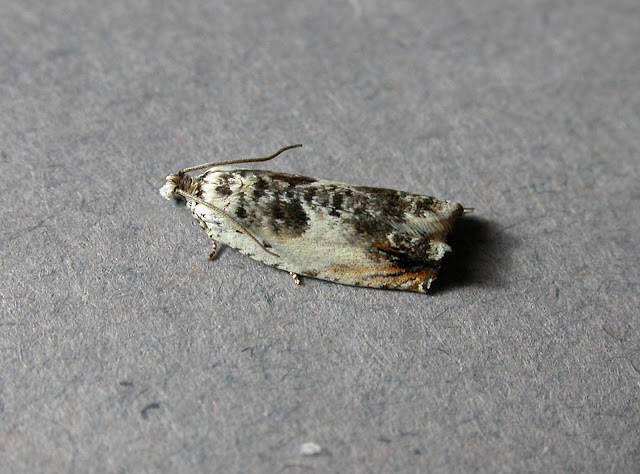 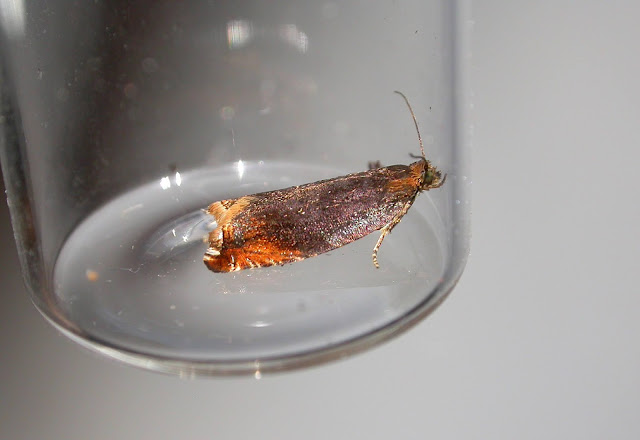 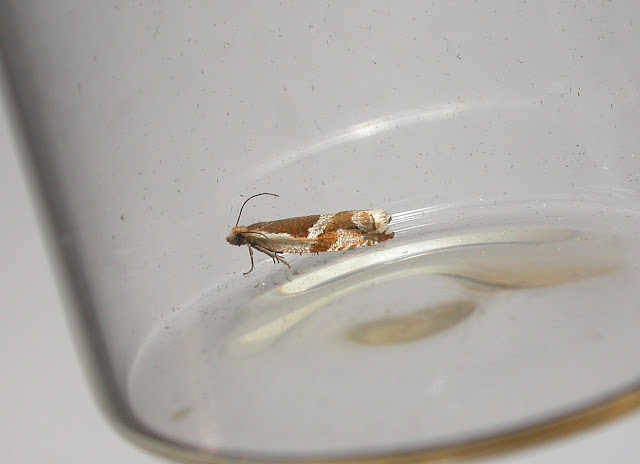 Ancylis myrtillana, Brafferton, VC62
The second period at Brafferton was four visits 12 July to 2 August, 956 moths of 122 species.  The highlights and new for me in this period were a Monochroa cytisella, a bracken feeder rare in Yorkshire and only the 2nd record for VC62; a nationally scarce B Nemaxera betulinella probably only 2nd recent VC62 record; a Zeiraphera isertana a scarce oak feeder, and the scarce pine feeding Clavigesta purdeyi. 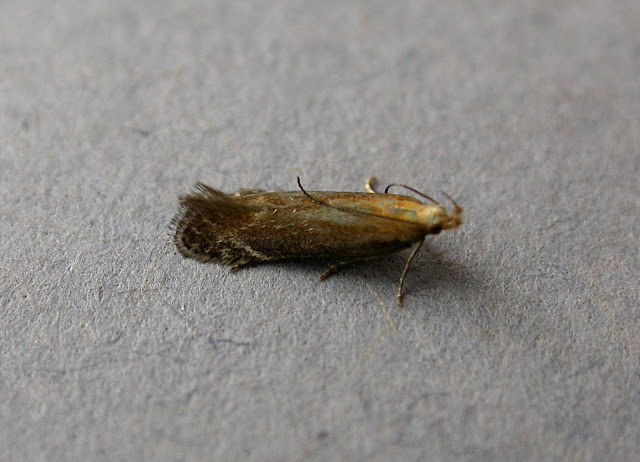 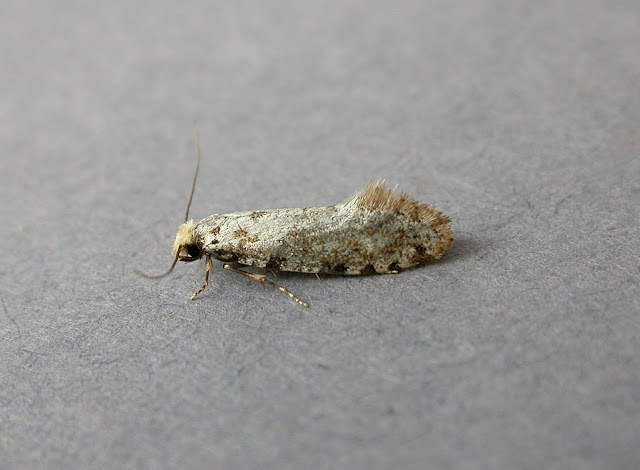 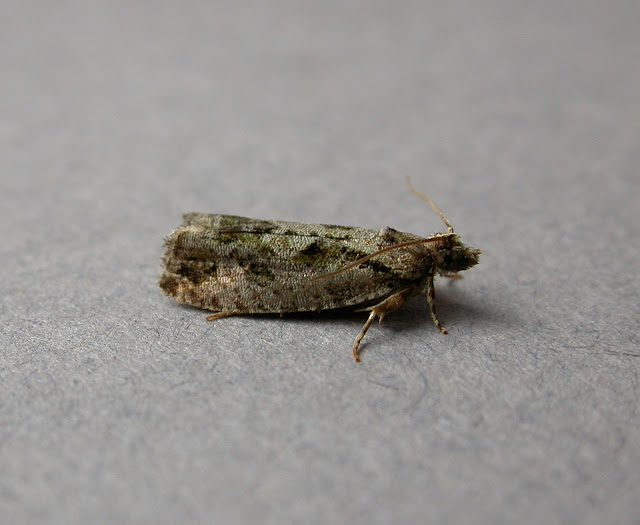 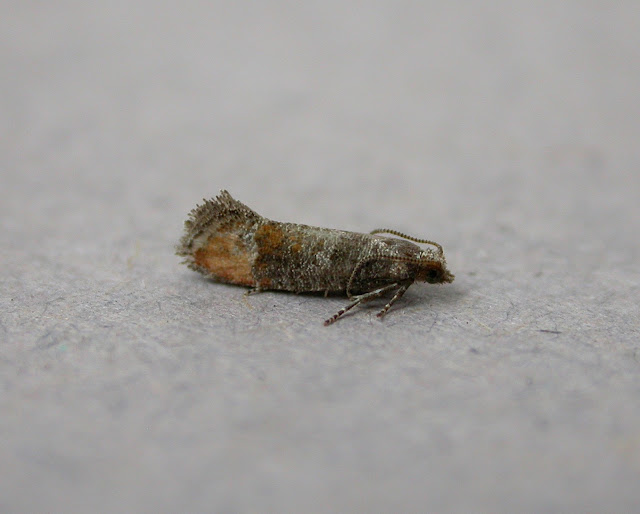 Clavigesta purdeyi, Brafferton, 30 Jul 2020
Following reliability issues with both generators I reverted with reluctance to trapping at home.  I trapped 14 nights between 6 August and 19 September, catching 821 moths of 115 species.  This was considerably more than I had trapped in the previous 13 years there, so unsurprisingly I added 71 new species to the garden list.  Most were the expected common species, but it was great to get 11 confirmed and obvious Willow Ermine 6 - 14 August, and best of all was a micro new to Yorkshire, Metalampra italica, not one but two specimens.
This Willow Ermine clearly shows the greyish cast to the cilia and main part of the wings, with a narrow white border to the outer edge of the wings. 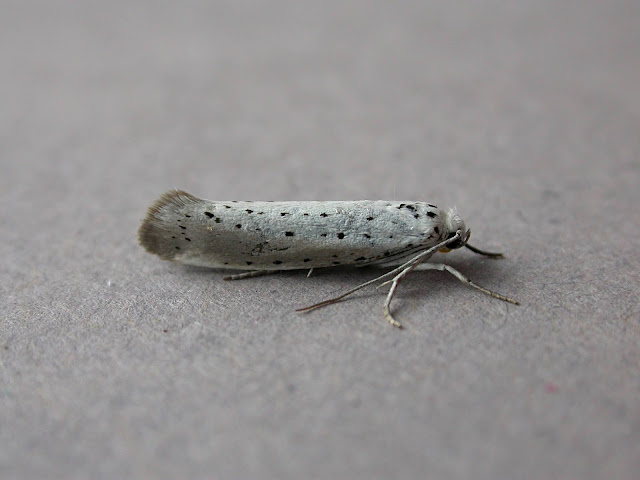 Willow Ermine Yponomeuta rorrella, Langthorpe, 6 Aug 2020
The next was a huge surprise, very obvious and not difficult to identify.  As a species it has an interesting history in that it appeared in Devon for the first time in 2003, and has slowly spread to other counties in the south, with odd ones turning up as far north as Lincolnshire and Lancashire, it was to be expected in Yorkshire.  Metalampra italica was previously known only from Italy before occurring in Britain whereas another species, Metalampra cinnamomea, is more widespread in Europe, including France and so seemed to be a better candidate for turning up here.  Having let my first one go, the second was obviously on its last legs and died shortly after potting.  I have forwarded it to Harry for gen. det..  This is a species that the larva inhabits decaying oak, and as there are not that many oaks close to my garden I wondered whether they arrived in my neighbour's hardwood logs for firewood? 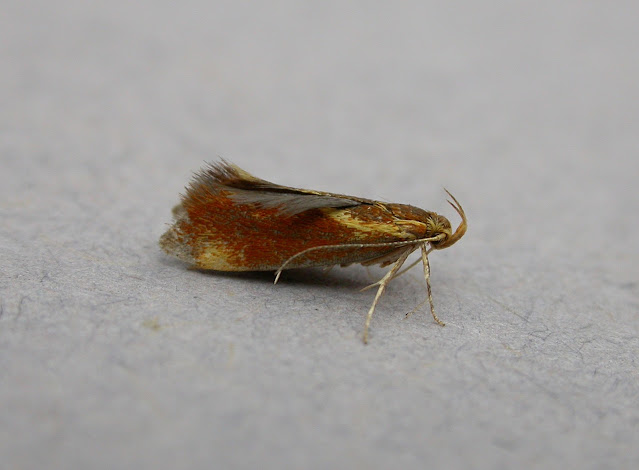 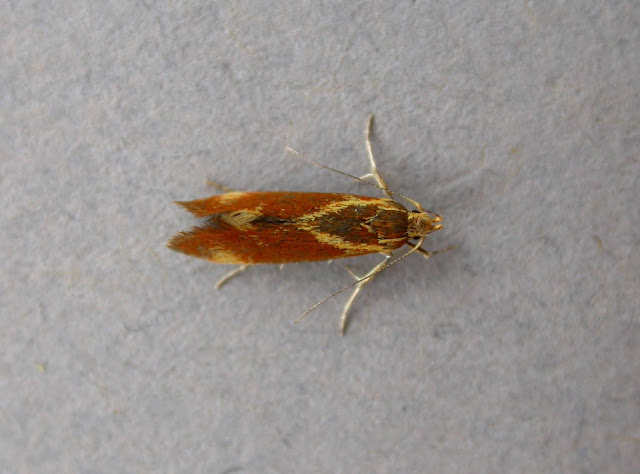 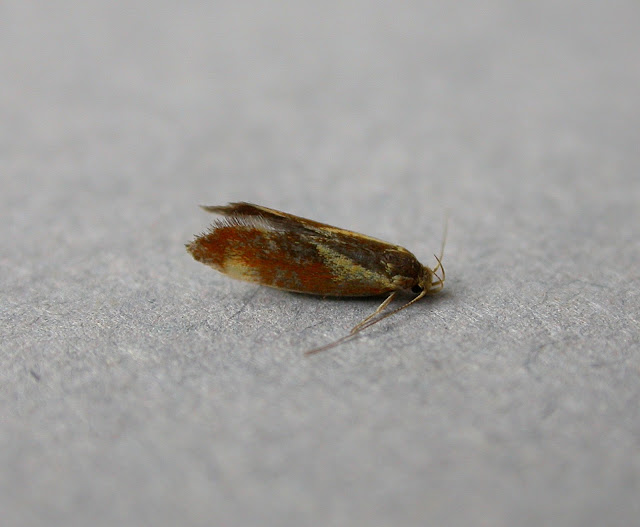 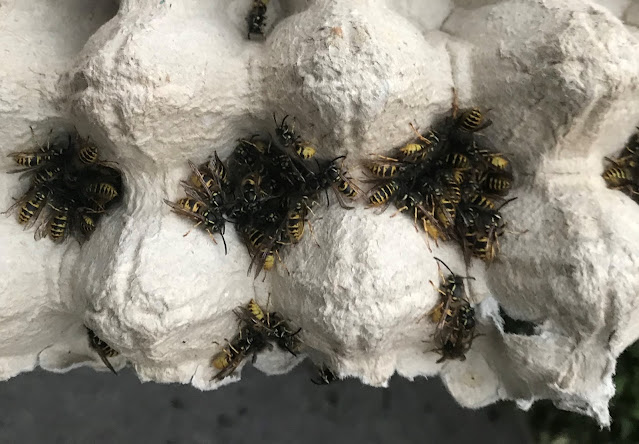 Trapping at Langthorpe becoming very uncomfortable in September with increasing numbers of wasps, on the last two occasions outnumbering the moths 10:1; fortunately they were very dopey and did not bother the moths or me.  I took the opportunity to set up my trap at my work premises nearby in Roecliffe (VC64) and was extremely fortunate to have another new species for me, a Tachystola acroxantha, new at least for the Harrogate DNS and quite a distance from the next nearest record...just 50 meters further north and it would have been new for VC65.  This adventive species originally from Australia and probably introduced on imported plants, was first found in Devon in 1908, and has gradually spread northwards. 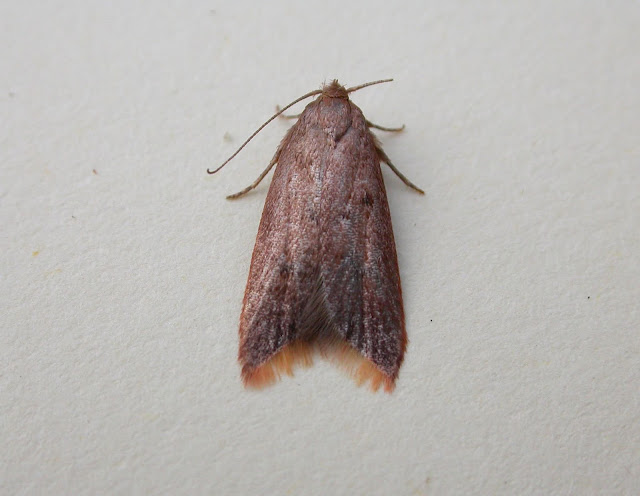 Tachystola acroxantha, Roecliffe, 21 Sep 2020
Having spent many hours sat on my terrace while isolating, I was fortunate to see some reasonable birds and butterflies.  Birds included Common Tern, Red Kite, Yellow Wagtail heard, Lesser Whitethroat, nearby singing Corn Buntings, Tree Sparrows, probable breeding Yellow Wagtails and at least one Hobby and a Blue-headed Wagtail. A good selection of common butterflies including several sightings of Holly Blue.  Finally a couple of other photos just to show it has not all been moths. 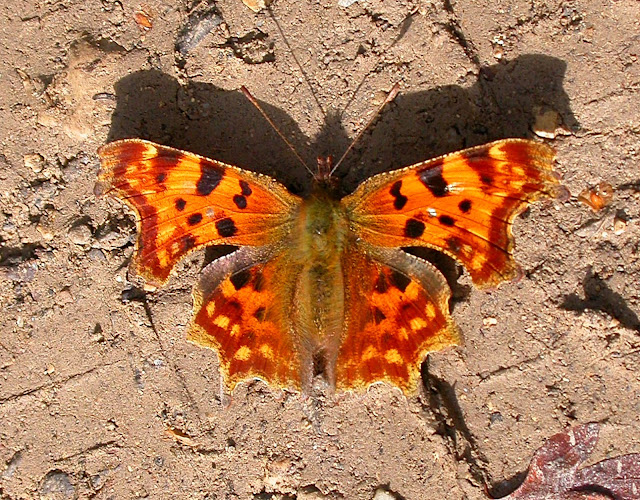 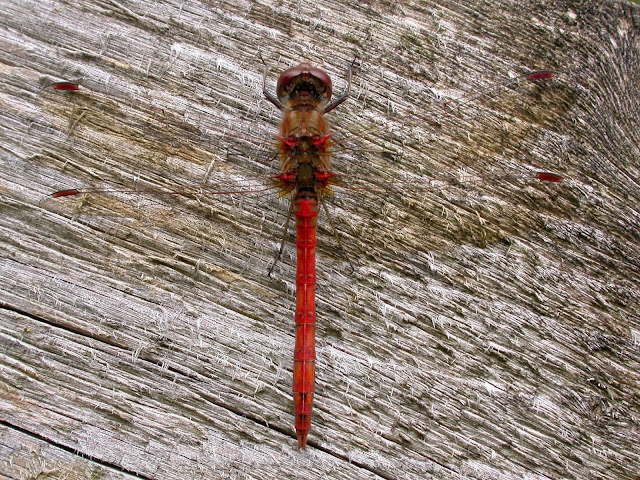 Common Darter, Nosterfield, 20 Sep 2020
What will the rest of the year bring and what can one hope to achieve in 2021?  At least I made it this far, and looking positively to the future.
Posted by grampybustard at 19:06